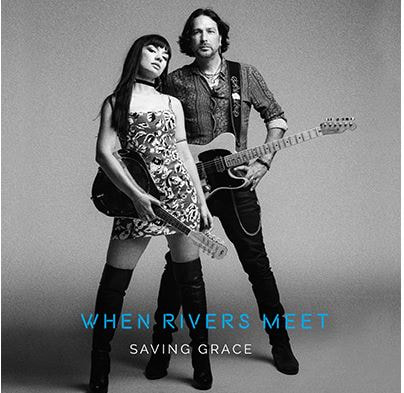 When Rivers Meet (aka Grace Bond and Aaron Bond) released their second studio album “Saving Grace” On November 19th 2021, so for many of you reading this review it might seem a little late in the day to be writing this, particularly as some of you have already purchased the album already.  Why the delay then?  Well the answer to that is that WRM are currently on their first headline tour taking in 14 dates including Edinburgh at the Liquid Room on 28th May (an Edinburgh Blues Club event). Having already seen WRM when they supported King King in Edinburgh last year, the new tour date was definitely on my “to be there” list, but unfortunately due to other things happening, that will not be possible, and their PR company were kind enough to send over the new “Saving Grace” album for me - maybe to remind me what I will be missing (and of course to get a review that links into the Spring 2022 tour).

I have been following the musical journey of WRM online for some time and, for me, they are probably one of the most unique and distinctive sounds to come out of the British Blues scene in many years, and that fact has been recognised by many other people too.
The first time that I heard some of the tracks on this album was watching WRM perform live last year, so I was curious as to how well a studio produced album would capture their very distinctive sounds, particularly Grace’s vocals and Aaron’s guitar.  The arguments over better live performance or better studio produced album has been part of all music genres for decades and it is always a bit of an unfair comparison to me as the two are very different sets of performance skills, the latter of course has input from many other recording industry talents to produce the final product.

The variety of songs on this album ranging from classic rock to classic blues has seen WRM move deliberately into a more of an upbeat rock feel, and it crosses over between this and a more traditional blues based sound effortlessly. This is an indication of not only the songwriting skills of Grace and Aaron who have written all but one of these tracks (the remaining one by Grace, Aaron and Adam Bowers), but their performance skills.  This has produced a very distinctive sound that in part explains why WRM are creating their own musical waves at the moment – making them the first band to win four UK Blues Awards (2021), and also being nominated again in three categories this year.

As always for me, a more polished and very well produced studio album will often take away a few of the more raw edges of any artist’s live performance, and this album is no exception, but it also adds new layers to Grace’s vocals in particular and we also have the added compensation of fuller arrangements of the songs.

Picking some favourites out from this album is difficult as every song here deserves a place in its own right, but for me “Don’t Tell Me Goodbye” and “Talking In My Sleep” are the stand-out songs from this album and show that WRM are so easily capable of writing songs that are taking them into so many musical spaces that are far outside their now expected blues based sound. This new album is also a nice package with a 12 page booklet. Check the song lyrics, these are not “throw-away” words.

If you get a chance to go and see WRM live in Edinburgh, or any of their other dates, take it as I don’t imagine that this duo will be player smaller and more intimate venue spaces for much longer.  Tour date and other information is available on from the WRM website at
https://whenriversmeet.co.uk/

NOTE. I did in the end make it to see WRM live, here is the Liquid Rooms 28th May  REVIEW