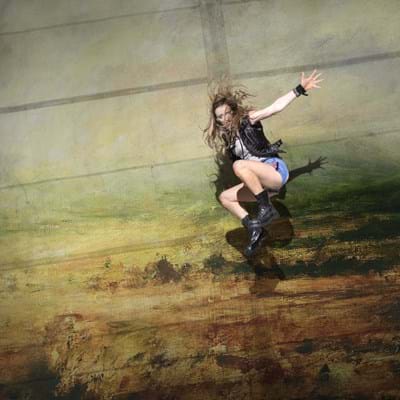 Wuthering Heights is at The King’s Theatre Edinburgh this week (Wed 25 to Sat 28), and if you are one of the many fans of this classic  book by Emily Brontë (published in 1847, initially published under her pen name Ellis Bell), then you will either love or hate this new production from National Theatre and director Emma Rice.

If you are going to attempt to bring Wuthering Heights to the stage, then you immediately have some initial problems as the story itself is not only meandering over many years, but also it has a relatively (literally) complex relationship between the main characters. Here we also have the problem of many different scenes to potentially bring to the stage whilst somehow keeping the story flowing in a linear time line (which the book often does not) if audiences are to make any swift sense of everyone and their individual stories in this saga.

Your options in the end come down to two – perform this as a literal on-stage recreation of Emily Brontë’s original story, or somehow adapt it and, if you are very good, do this whilst both staying true to the original core of Wuthering Heights, but also adding your own creative input and take on the story.  Here, Emma Rice has adapted and directed her version of Wuthering Heights by skilfully making the one constant and central backdrop to this story, the very moors of the West Yorkshire  landscape, not only a central set piece always changing on a large screen at the back of the stage, but also giving them their own living identity.

Emma Rice obviously feels a great personal connection not only to this story, but the landscape in which it is set, and here we also get to explore not only this landscape and the central characters of Wuthering Heights, but we also get to ask many questions about all of this. Who is Heathcliff and what exactly is his real relationship with Catherine?  What events have made Heathcliff the man that he was to become?  These two questions are central to every event that unfolds in this story.

Is Wuthering Heights a story of true love, two souls somehow bound together through not only this life, but forever after death, or is it the story of a man who has his heart forged by the cruelty inflicted upon him by others in his early years to become a cold-hearted, manipulative controller and abuser of everyone around him? How you answer these questions probably comes down to who you identify with in this story, Catherine or Heathcliff.  Either way, both sides of both people are brought to life in this story by Lucy McCormick (Catherine) and Liam Tamne (Heathcliff). Both are excellent in their respective roles, but on-stage the persona of Heathcliff is certainly the very dark and increasingly very unpleasant psychological and increasingly physical abuser of everyone around him, and this gives Liam Tamne very few opportunities to explore the rather twisted, but still dark, gothic romantic elements of his character.  It is easy to see in this Heathcliff just what an impact bringing such real life people to life in her story Emily Brontë would have had on her readers. Emotional and physical abuse of women was not a subject anyone wanted to discuss openly in the early 19th century (and many still do not want to do this in the 21st century either). It is also important to place this novel and story unfolding on-stage in the context of the times where a woman had very few legal rights and virtually no rights over property.

Lucy McCormick as Catherine gets a far broader brush to paint with here and brings to life a woman who is both a free spirit, a true child of the moors, but one forever in a very emotional state that conflicts constantly with the rigid society rules around her that she eventually has to conform to.

There are many other interesting performances here with cast members, including Katy Owen, Tama Phethean and Witney White, often playing two roles (or more) as our love story moves from one generation to another with often unexpected twists and turns. Central to all generations is Nandi Bhebhe as The Moor.

There is new music and a live band with this production (composer Ian Ross) and one real surprise here for me was the vocal power and very individual identity of Lucy McCormick, and I need to explore other musical projects by Lucy at some point in the future.

If you like your Brontë stories performed as period costume dramas then this production is probably not one for you, but if you believe (as many people do) that a great story and great characters are always strong enough at their core to constantly be re-imagined and re-interpreted then this is probably going to be an interesting theatrical experience for you, and one that makes you challenge at times the original story and that always ambiguous relationship between Catherine and Heathcliff.