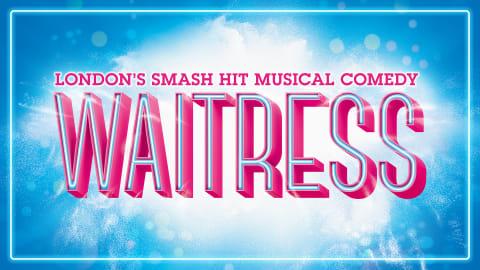 Waitress is at The Playhouse Theatre Edinburgh this week (Tue 19 - Sat 23 Apr), and to be honest, I was expecting a very light and superficial musical “blueberry pie” slice of musical theatre on-stage tonight. Instead, however, I got a real surprise and Waitress is a show with a well scripted story line that gives us, the audience, a level of depth into the individual workers and some of the customers at Joe’s Pie Diner, off-Highway 27 somewhere in small-town Indiana, to actually make us invest time in them and start to care about them a little, and that is always a difficult thing to do well.

Waitress the stage show was first performed in 2015 and reached Broadway in 2016, and it is based on the film of the same name from 2007 co-starring  Adrienne Shelly, who also wrote and directed the film. Waitress was released posthumously after the never yet fully explained death of Shelley (officially recorded as suicide).  Through the success of the stage show, the work of Adrienne Shelly is constantly being kept alive as new productions continue to tour.

There are many reasons why Waitress is becoming a sub-culture classic in the making, but tonight a big part of that success must go to some last minute cast changes as understudies take to the stage for three of the main characters, including the lead role of Jenna (Aimee Fisher), plus the roles of Dr Pomatter (Liam McHugh) and Earl (Donal Brennan).  It is a tribute to the depth of talent in the team behind Waitress that this could not only be pulled off, but done so well, and that everyone took on their respective roles as if they were doing them every performance.

The part of Jenna is not an easy one to perform as she is the focus point of nearly everything in this story. This means that either delivering straight dialogue or singing, Jenna is pretty much never off centre stage from start to finish here, and Aimee Fisher is so good both dramatically and musically that you could believe this role was written for her, and I for one hope this is Aimee’s chance to move into the stage spotlight herself and become the theatre success that her talents so obviously deserve. Aimee also has that ability to make you believe in her scenes with her husband Earl (Donal Brennan) and her unexpected love interest, Dr Pomatter (Liam McHugh).

Jenna is one of a trio of waitresses at the diner and Becky (Wendy Mae Brown) and Dawn (Evelyn Hoskins) and a well written script makes us believe their stories as snippets of their life outside the diner slowly unfold. Rounding off the main cast there are also some fine performances from Cal (Christopher D Hunt), Joe (Michael Starke), and Ogie (George Crawford).

Waitress is a musical, and although any good musical needs a solid story at its core (Jessie Nelson), it also of course needs songs, and here, Sarah Bareilles (music and lyrics) has created some great songs that are constantly changing in style, tempo and emotion.  There are more than a few standout songs in this show and Jenna obviously gets most of them, including Bad Idea, but Becky gets to impress with “I Didn’t Plan It” and Joe gets perhaps for me one of the best songs in the show, the wonderfully written “Take It From An Old Man”.

People say that to bake something well you have to do it with love and put a little of yourself into your baking, and in this case that is Jenna and her many amazing “pie creations”.  Food is obviously an important part of this show, and many songs feature it in one way or another, but the double meaning of the duet song between Jenna and Dr Pomatter – “It Only Takes A Taste” is an especially cleverly written song.
This show could have been a sweetly sugar-coated adventure, but instead it has a very dark story sitting underneath all of the gloss.  As well as this, some other difficult questions and choices that some people have to make in their lives come to the diner tables too.

Does Waitress have a sugar-coated fairy tale ending or does the darker side of this story overtake the light and hopes of Jenna?  Well, that I am not telling you, this show has more than a few surprises in it and they should stay surprises for anyone intending to go to the show for the first time.