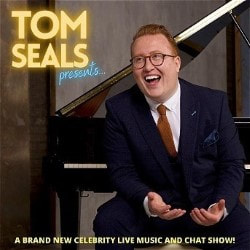 Tom Seals Presents at The Edinburgh Festival Fringe 2022 – Assembly Ballroom is a music chat show where Tom mixes informal interviews with a different guest each evening alongside his own arrangements/interpretations of some of his guest’s favourite songs.

This format is born out of an idea that saw a series of internet broadcasts catch the attention of Sky TV, which led to a very successful series of shows on their programming.  As well as this, Tom also is very busy with his own physical sell-out shows in many countries, and this busy schedule is why this show is only here for four nights (3 to 6 August).

Tom Seals is a very talented performer and his love of the  boogie-woogie piano style that has helped to make him so popular with so many audiences is evident here, but this is something that for me we get too short a time with as the interview style of this show takes up too much potential piano playing time.

An interview show like this is obviously going to live or die by the combination of who is the guest for the evening and how they interact with both Tom and the audience.  Tonight Tom’s guest was long time stand-up comedy, quiz and television personality Paul Sinha, who is also at the fringe with his own Sinha Life show.  I have to admit that as someone who does not go to stand-up comedy shows and gave up watching television many years ago (partly because of endless quiz shows), this was perhaps not the perfect guest for me.  Paul was, however, a perfect guest for Tom as the two obviously had that very easy rapport with one another that is so essential if a show like this is to work, and Paul’s observations on many things, including perceived so-called “celebrity status” and smart phones and Google killing off “pub quizzes” were interesting and entertaining.

This show is also about music, and Paul’s choices of songs this evening were two songs that had special meaning to him – Rent (The Pet Shop Boys) and Smalltown Boy (Bronski Beat). His “get-up and dance” choice was the wonderful “I Want You Back” (Jackson 5).

For obvious reasons for a Fringe show with only a few dates, this is a stripped down Tom Seals show, as he so often performs with his own 12 piece band. Although this bigger show with Tom hitting all those boogie-woogie notes is one that I have to make time to see at a later date, tonight’s show did allow me to clearly see a little bit of a performer who is interesting for many different reasons.

The show’s next guest (4 August) is Noddy Holder and, if like me, the band Slade were a big part of the musical soundtrack of your youth, then this is going to be a show not to miss.