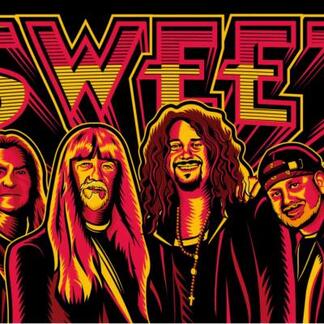 The Sweet were at the Queen’s Hall Edinburgh tonight playing one of the many dates in their current 2022/23 tour, and as always, the fans were out to hear some of their favourite Sweet songs performed live. As you would expect, a lot of the people in the audience tonight were of an age to have been around in the 1970s to hear many of these songs first time around, but a lot of younger people were there too.  That is always part of the pleasure of being at a Sweet concert, these songs have effortlessly crossed the generations.

For me, this band were part of my youth, and I have such vivid memories (that are now of course all over the internet) of watching that classic 1970s band line up of lead vocalist Brian Connolly, bass player Steve Priest, guitarist Andy Scott, and drummer Mick Tucker on Top of The Pops during the Glam-Rock years.

For obvious reasons, that band line-up can no longer be with us today, and if you still for some reason expect that look, forget it, as Andy Scott himself tells us, many reasons for no white leather jump suits on stage today.  Visually,  this current line-up, taking to the stage dressed in back to the sounds of “Still Got The Rock”, is very much that of a contemporary rock band, and the sound of some of the  new material is harder than some of those chart hits from the 1970s.  This though is really not at its hear that different a band as classic rock band element has always been there=ask anyone who turned over to the B side of a single of the 1970s. I also remember the band with that non-glam look on Top of The Pops for "Fox on The Run", and it was good to hear that song, written by Andy Scott again tonight.

Starting with a classic 1970s song, “Action” we then quickly shifted to a song that this band have unexpectedly made their own, (perhaps even eclipsing the Ace Frehley take on it) “New York Groove”.  The next song, “Hellraiser” was the one that immediately had many people in the audience standing up from their seats, and that was pretty much the way the rest of the evening went as interspaced with newer material from the current band, classic hit song after hit song followed. Unlike us, those iconic songs written by Nicky Chinn and Mike Chapman, songs are not ageing, they are as razor sharp now as they were first time out, and if anyone ever doubts that then just go along to a Sweet concert and watch the audience reaction to “Ballroom Blitz”, or “Blockbuster”. Also great as always to hear “The Six Teens (always my favourite Sweet song). If there is a secret formula to writing a top 30 chart hit song then Chinn & Chapman seem to have found it all those years ago

This version of The Sweet is not however a tribute band living out its former glory days on stage, they are simply a great band to watch on stage, and an return to a time when music was allowed to be simply “fun”.  This is the secret I think of The Sweet. In truth, the band has never gone away, for 50 years now, whatever the line up, Andy Scott has kept true to the original vision of the band that he helped to create and allowed it to evolve naturally into what it is today.

Whatever the song, old, or new, Paul Manzi  is a a very special singer, a voce almost out of time…a time when Britain produced great rock vocalists. For me Paul Manzi  is not only one of the most impressive rock band vocalists out there at the moment, but someone who clearly knows how to entertain an audience.  Holding everything together though, no matter what the band line up, the unmistakable sound of Andy Scott on guitar.

Opening this show this evening, Terrorvision front man Tony Wright with an acoustic set with a selection of songs including some from his new album “The Anti Album”.  It is always interesting to hear how songs came to be and Tony’s introduction to some of the new album – “Sleep”, “Canonball”, “Gamble, Drink & Smoke” show that he is a writer who watches people and listens to their stories. There is at times a darkness to some of his work, but this is also balanced with humour and an ability to be very self-aware of his own darkness and light.

Vocally there is also that rougher edge, that I often associate with the best folk singers of days gone by when they used their songs as a protest to highlight the many wrongs and inadequacies of our society. Tony Wright can clearly move easily between this world and that of some of his earlier works with Terrorvission (and other bands).