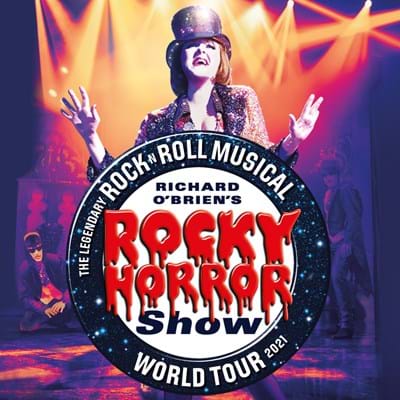 The Rocky Horror Show is at The King’s Theatre Edinburgh this week (Mon 21 Feb to Sat 26 Feb) and, as always, the faithful Transylvanians and “creatures of the night” were out in force to support their on-stage heroes – human and alien.

If you have not seen The Rocky Horror Show then imagine (if you can) a high heeled, stockings and suspender belt musical show devoted to all those classic sci-fi serials and B movies of yesteryear, a nostalgic trip down cinema’s memory lane with more than a slight twist of sardonic irony and celebration of simply being just who you really want to be.

Somehow, maybe because it is trapped in a time-warp, this show is nearly 50 years old, and although it is in parts now showing its age, so are many of us who have loved this show over the decades, and we have grown older with it, and if we are truthful, maybe got stuck in our own little time-warps too. As always though, it is a pleasure to see just how wide the age range of the audience is and something about this show is always keeping it fresh and attracting new people to it, both young and old.  Over the last few years, the show has had more than a bit of a re-vamp, and many people think that this was both much needed and overdue. Other people (including myself) still have the jury out on some of the changes as the show was simply perfect first time around.

If you have not seen the stage show, the chances are that you have seen the 1975 film adaptation – The Rocky Horror Picture Show - and the never ending popularity of this means that so many people are familiar with many of the songs from the show, including of course “The Time Warp” and “Sweet Transvestite”.  This film is always a bit of a moonlit shadow hanging over the show too as Tim Curry’s now iconic performance of Dr Frank’n’Furter is in so many people’s minds that whoever plays this part on stage is always going to have to overcome this old ghost.  Some people manage this whilst others fail, but tonight, Stephen Webb stamped his stiletto heels all over the stage and made this part his own with a performance of a very strong, at times camp, but when needed a menacing and obviously slightly insane Frank’n’Furter, and he had the audience with him from the first few moments of his arrival.

Equally iconic in image is of course Riff Raff, and after so many performances of this role, Kristian Lavercombe has pretty much defined this character on stage for so many people over the years and did so again here with Suzie McAdam (Magenta) and  Lauren Ingram (Columbia) completing a perfect on stage trio. Completing our main cast were Joe Allen (Eddie & Dr Scott) and Ben Westhead (Rocky),
The sinister plots of our above trio are of course balanced (at the beginning at least) with the sheer naivety of our stranded couple Brad and Janet (Ore Oduba and Haley Flaherty) with Haley being one of the best “Janets” I have seen on stage for a few years.

So much of this show of course rests with our narrator, and it is his job to not only tell the story, but also be the main connection point between the audience and everyone on stage, and it is always the narrator who not only has to inject some topical elements into the evening, but also to be able to run with so many of the comments thrown at him by audience members. This evening, Philip Franks was more than up to this job.

Sometimes, despite all the well-loved and iconic songs and characters, The Rocky Horror Show can fall a little bit flat if the cast is just not fitting that well together in parts, but here everything was pretty much as it should all be and the end result was a sharpness and a bite back into this show that has at times been lacking in recent years.