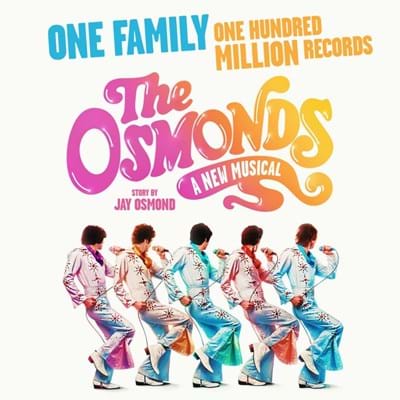 The Osmonds A New Musical is at The Festival Theatre Edinburgh this week (Tue 20 to Sat 24 Sept) and with a story by Jay Osmond (drummer) this show gives us an “inside the family” viewpoint of the family behind some of the biggest selling chart songs of the early to mid-1970s in the USA, UK and many other parts of the world.

If you are old enough to have been around at this time, then you will probably remember the hysteria of young girls around the country on their first UK tour, their pictures being in pretty much every pop magazine (and often national newspapers), and at least one or more “Osmonds” appearing somewhere pretty much every time you switched on “Top of The Pops”. The Osmonds were like a viral social media campaign today, simply no escaping them, or their music (whether you liked it or not).

There are really only a few ways that you can present a show like this – use the songs and the lyrics to tell a new story (Mama Mia), do a straight “Jukebox musical”, or tell the history of the band/performer.  Here, Jay Osmond, Julian Bigg (book) and Shaun Kerrison (book/director) have gone for the latter and we start our story at the very beginning and the early days with their residency on the Andy Williams Show (1962 to 1969) as children. This is actually where the show gets a little inventive as not only do the young people playing them at this early stage sing a few of the many songs from that show, they also later in this show become memories of the older Osmonds. This approach does mean that the story line is constantly moving back and forth from the Osmonds’ current time frame to their past, but it is worth it as there are many insightful moments here to their very strict upbringing as children and to the pressures that having to grow up in front of millions of television viewers can place upon a young person. For them, two things always came first, faith and family, and this wholesome image was soon to have a serious PR team around it not only to project that image, but to protect it at all costs.

This show was due to premiere in 2021 but had to be re-scheduled to this year due to Covid restrictions and finally had its world premiere at the Curve Theatre, Leicester on 3 February 2022.  The fact that this show is in the UK and not the USA for its premiere is noticeable and perhaps shows just how important UK audiences with “Osmondmania” were to them.

As you would expect, this show has the big hits like Love Me For A Reason, Crazy Horses, Let Me In, Puppy Love, One Bad Apple, Long Haired Lover From Liverpool (who can ever forget this one no matter how hard they try?), Paper Roses and many more but, despite this, this show seems to have some problems. A show like this one is always going to be for the fans, and although there were many women of a certain age in the audience tonight who were probably “Osmonds” fans in their youth, this audience was for a large part very reserved and these songs just did not seem to be connecting that well (and on some, this should have been instant). The first signs of any real audience connection was with “Puppy Love” and I have to be fair and say that this did improve in the second act.

Why was this? I am not sure to be honest as the Osmonds on stage (Merrill (Ryan Anderson), Alan (Jamie Chatterton), Jay (Alex Lodge), Wayne (Danny Nattrass) and Donny (Joseph Peacock) plus Marie (Georgia Lennon) were all giving good covers of the songs.  One reason I think is that the first Act takes a long time to establish the Osmonds to the point that most UK fans recognise them as “The Osmonds” and although we did get the Andy Williams Show in the UK we never got those very early years with the Osmonds and many people maybe never even saw them on it, or if they did, they never connected them with the “Pop” band that they became.

You are also always stuck with a problem when producing a show like this as the fans will probably know every little detail already and expect much of it to be in the show (and a lot of detail was here). The casual listener of the time though only really wants to listen to the music, and satisfying both is always a problem. Does this show get that balance right? Most of the time it does.

This is in the end of the day one family member’s viewpoint on the personal relationship dynamics of perhaps one of the most famous and successful families in the history of pop music and that was always going to be interesting.  For me though, this show could really have done with some archive footage of the times to remind us all of just how crazy and, with the passing of time, how surreal some of those scenes of mass hysteria around the Osmonds were really like in early 1970s.  This was also a missed opportunity for Jay to add some personal photographs/movies from the family archives and give this show a very personal connection and also give an extra special treat to many fans.

If you go to see this show, whatever you do, try and stay until the very end of it as this is where some of the best musical moments are.