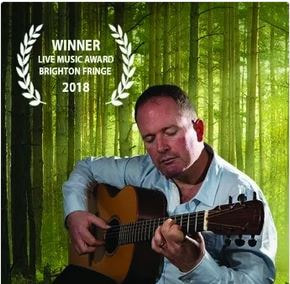 Geoff Robb The Music of the Trees at theSpace @ Surgeons' Hall is one of those all too easy to miss performances at this year’s Edinburgh Festival Fringe, fighting for attention as it is amongst the many others out there, but it is well worth taking the time out to visit.

At first glance the title of the show gives the impression of being some sort of “new age” trip into the esoteric realms of fantasy, but in reality nothing could be further from the truth. There are two things that you will notice about Geoff Robb when he comes to the stage – one is a calmness and a peace with the world that few of us seem to be able to achieve, and the other is his skill as a guitarist. Geoff Robb is a classically trained guitarist and this shows in every movement of his very precise and expressive playing. Music of The Trees is actually the title of his latest album, and although the ten instrumental works on this album have been inspired by his love of trees and ancient woodlands, Geoff Robb has not been talking to trees and they have not been talking to him – well not in that direct way, but something about being close to them and to nature is obviously influencing in some indirect way his music for this project.

Each of the tracks on this album is dedicated to a specific tree, and Geoff’s research for this project has taken him further into the world of trees and woodlands with many facts, true science, old and new uses of trees, and of course their place in history and myth. The story of trees is also part of this show, but the time limits of a Fringe show do mean that it is impossible to cover all the trees on the album and all of their stories.

As Geoff gently plays his “Music of Trees” and tells their stories we get a small insight into these wonders of nature and how ancient they can be.  The Fortingall yew in Perthshire is estimated to be at least 3,000 years old (some even think that it could be 5,000 years old).  Trees are wonders of nature that we are only just starting to understand in the smallest way. They are literally living storage libraries of climatic events during their lifetime and natural early warning indicators of climate change. Trees have long been givers of natural medicines and remedies and contain many secrets to developing many new cutting edge drugs, that is if de-forestation globally does not destroy these secrets forever before we even guess at their possibilities.

The Music of Trees is perhaps a more apt title for this show than first impressions give though as Geoff tells us that ancient woodland trees actually share nutrients and information with each other via an underground forest floor network of vast and complex fungal connections, almost like a forest neural network. Trees and the forest itself are clearly far more alive as a “community” than we have ever before guessed. There is, if we want to take it, the opportunity for many of us to walk away from our very disconnected from nature, “concrete and steel city” lives and re-connect with nature by doing what Geoff Robb so obviously loves to do and re-connect with trees. This show is not only a quick guide to the many possibilities and benefits that this can bring to you, but also a chance to watch a skilled guitarist and songwriter on stage. Music of The Trees is music to calm our often all too hectic modern lives.