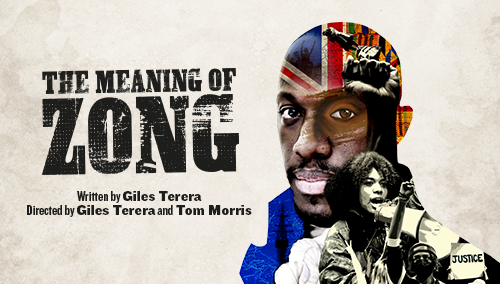 The Meaning of Zong is at The Lyceum Theatre Edinburgh from 13 April 2022 to 23 April, and if you have the time, then get yourself a ticket for this, as “Zong” is on for a far too short a performance run for a work of this importance.

If, like me, you have an interest in British history from the 18th century onwards, the 1700s to 1900s will probably be a period of great interest to you and, for me, one of those main periods with so much happening is the 100 years from 1750 to 1850.  It was here in the late 1700s that so much of the world that we live in now was really founded – so much of our legal, educational, religious, banking, commerce and trade systems come from this period. Also of course we have the start of the Industrial Revolution and the major building blocks of what was to become The British Empire. It is the far darker side of that British Empire and its massive involvement in the Atlantic slave trade, the very creation of wealth by reducing another human being to nothing more than an owned commodity with no legal rights whatsoever, that this work is about and one event in particular - Zong.

The story of the slave ship Zong is one that I have known about for a long time, but it is one that I had to find out for myself as I was never taught anything about it at school.  In fact for me Britain’s involvement with slavery was pretty much a taboo subject in the educational system, and I don’t know to what extent that has changed much over the years. Thankfully though, the internet has given everyone access to so much information (if they wish to look for it) and I realised after watching this production that I still have so much more to find out about the events in The Meaning of Zong and some of the main people in this story.

In a very brief overview here, this is the true and documented story of events that took place on the British slave ship Zong on the days following 29th November 1781. On its journey in the Caribbean, navigational mistakes heading for Jamaica has resulted in an increased journey time which by default has resulted in the drinking water on the ship being in risk of short supply, and possibly even running out.  The solution was to start throwing some of the cargo overboard. This cargo, the property of the shipping syndicate, was human cargo, slaves, and it was deemed that their losses could be recouped from their insurers.  Over a period of days, over 130 people from the already overcrowded slave cargo (over 400 in total), mostly women, were thrown in their chains into the waters to their death.  The eventual trial in Britain between the ship owner and the insurers over who should pay for the cargo resulted  in the wider implications of the case becoming known for what it truly was, the massacre of over 130 human beings for nothing more than financial greed.

This is the story of Zong, but it is also our introduction to some of the leading figures in the British anti-slavery movement of the time, as well as some of very few Africans who had somehow survived their journeys of slavery to become known figures in society. Foremost in this story is of course the man who first brought to light the Zong massacre and who later turned his story into a book - Olaudah Equiano  (aka Gustavas Vassa and other given slave names) played here with authority, power and quiet dignity by  Giles Terera. By the clever use of his portrait painted by Thomas Gainsborough we are also given an introduction and small insight into the life and works of former slave, Charles Ignatius Sancho.  We also meet one of the leading figures in the abolitionist movement, Granville Sharp, who is so well played Paul Higgins.  Together Giles Terera and Paul Higgins are perfect counterparts on stage with their characters constantly contrasting but always adding to this story.

A big part of the success of “Zong” on stage undoubtedly lies in the way Giles Terera has written this work and co-directed it with Tom Morris, and in other less skilled hands this could so easily have become a very confrontational work of theatre.  Instead of this we have a work which has wisely chosen to tell the story from the tradition of the oral story-teller so fundamental to his own cultural background (also a very important figure in Celtic culture too).  Here we are introduced to three women who are kidnapped, deprived now of even the most basic recognition as human beings and thrown aboard the slave ship Zong, and Kiera Lester, Bethan Mary-James and Alice Vilanculo bring with an unassuming ease the full power of their individual stories to life. Watching and listening as they try to hold onto not only their names, their cultural identity, but their very human individuality is at times an emotional roller-coaster.

Much of this story in Act I is set against a minimalist set and here it works well as the power of this production is in a story of real emotions with a cast who have the skills to bring these words to life on stage. For Act II an interesting and economically used when required expansion of the set and visuals gives great weight to this story as it unfolds.

The Meaning of Zong is not just a voice for the 130 plus souls thrown into a cold and watery grave over a few short days, it is also the voice of the more than 12 million human beings who were captured/sold/transported and denied any semblance of human dignity over the all too long a period of The Atlantic Slave Trade.

Slavery is not dead, its ugly face is still with us today, but it has just often changed its name. The voice of Zong is not just for these lost voices of the Atlantic Slave Trade, it is also for anyone, past or present, who is denied their own voice and who has become exploited in many ways, physically, financially, culturally and in many other ways in the world today as the reasons behind it always remain the same, man’s inhumanity to his fellow man and so often for nothing more than personal monetary gain.

I need to finish this review with a mention to Composer & Musical Director Sidiki Dembele as his live performance of traditional instruments added so much to the atmosphere and feeling of Zong tonight.