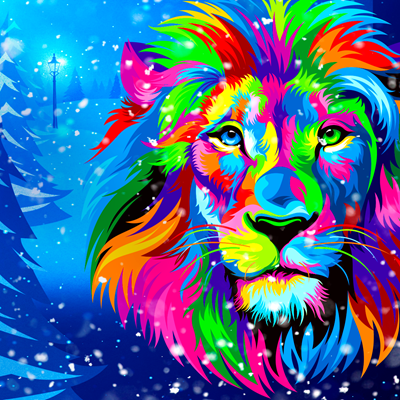 The Lion, The Witch and The Wardrobe is at The King’s Theatre Edinburgh this week (Tue 08 Feb to Sat 12 Feb) and this show, as the company’s website tells us, is “the first major tour of this classic piece of British literature”.  As this show has already received critical acclaim and commercial success, I was curious to find out for myself how this ever-popular story of four wartime refugees already uncertain of the world was going to transfer to the stage or how they were going to react when they encountered the magical lands of Narnia through their wardrobe gateway.

The first thing that is obvious about this show is that it has had a sizeable budget spent on it, and an interesting and very visual stage set/design (Tom Paris) is the first thing that attracted my attention as the wartime classic “We’ll Meet Again” played out over our crowded train platform.  The choice to include live musical song and dance performances throughout this show is interesting, and in many parts of the story highly effective, but at the end of the day, is this story a musical?  I don’t have the answer to my last question, but the one thing that I am certain of is that it is the story, the words of the original books by C.S. Lewis, that has endeared the Narnia Chronicles to generations of children since their first publication from 1950–1956.  This is a narrative driven work and I am not convinced that the compression of the story already necessary to bring this book to the stage can allow even more time to be taken out of it for song and dance routines.  Somehow the folk style, at times almost pagan ritual celebration of nature dances, are clashing a little with the very obvious Christian overtones of this story. To balance this comment out, I have to say that I found the music in this production hugely interesting and I would happily sit through a performance of just the music (Benji Bower and Barnaby Race) from this show itself.

This production has checked every box before coming to the stage and the work, time and collaboration of many creatives is obvious here, nothing has been left to chance, down to the back up of this show at an educational level too. The problem is that at times there are simply too many elements competing for very limited time on stage to shine and the end result is for me an all too often cluttered landscape of possibilities that are just not converging into a cohesive “Narnia”.

For this story to work, so much has to rest upon the performances of our four wartime evacuees and here Lucy (Karise Yansen), Edmund (Shaka Kalokoh), Susan (Robyn Sinclair) and Peter (Ammar Duffus) seem to be constrained by time to tell their story in full and this leaves me getting from them none of that sense of discovering a magical land by stepping through a wardrobe that I would expect a child/young person to have.  That wonderment is simply not there for me.  Other roles in this story are even more problematic from the very beginning, and perhaps the most obvious is that of our witch, and try as hard as she wants to, but there is just not enough in this stereotype character for Samantha Womack to do much with and no amount of on stage visuals is going to compensate for that. Faring a little better here is our wise lion Aslan (Chris Jared) whose performance, coupled with the impressive puppetry of our on stage lion in the second half of this show, make up for so much of an uneventful first half.  As always though, with Aslan, there is no escaping the religious overtones of this character and it is a reminder that these stories were simply written at a different time, for a very different audience, and unlike Narnia, time has not moved on so very slowly in the real world.

There is always in this show a question for me as to whom the production is targeted at, as it is n parts very dark and at times quite abstract in its storytelling technique.  How many children are going to relate that well to The Professor (Johnson Willis) having a cat called Schrödinger or references to quantum mechanics? There is still that childlike fantasy to our fawn, Mr Tumnus (Jez Unwin), but in the end have the stories of Narnia simply by their huge popularity as major films with huge special effects budgets lost their way, lost their message to some extent to simply become nothing more than just more names in the digital fantasy world of many children now?

This show does have many plus points to it, and some very well done on stage illusions are used to very good and at times very subtle effects here but in the end, is it time to leave the wardrobe doors closed for a while and let a new generation discover them in years to come in their pure form as wonderful children’s books?