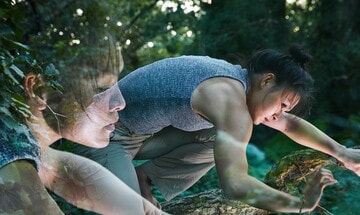 Jungle Book Reimagined at the Festival Theatre, part of this year’s Edinburgh International Festival takes a much-loved story by Rudyard Kipling as its source material and skilfully retains many of the important lessons that the original teaches us (respect for all the animals and nature, plus the importance of co-operation) and weaves them into a story for modern times. This reworked story highlights the potentially devastating climate and environmental changes that appear to be just ahead of us in our lives.

In this not too far off apocalyptic vision of the world to come, climate change is giving us two versions of hell at the same time on earth. Depending on where you live, the chances are that you will be forced to move to higher ground due to rising flood waters, or simply move to anywhere that you can to avoid devastating droughts and food shortages.  Nature is reclaiming the earth from man as many try in vain to cross her floodwaters in anything that they can use.  For the community that the Mowgli of this story belongs to, she and her mother are among many others attempting a journey to safer lands to escape the rising flood waters that have claimed their homeland, aboard cargo containers. However, the waters claim Mowgli and she is washed ashore in a now deserted city where zoo animals roam free. Will her “new jungle friends” accept this strange “man-cub” as one of their own, or hold her accountable for what man has done to them and their world around them?  The answers, of course, are not that simple, nor that black and white, and this layering of story telling is in part what makes this such an interesting work of theatre.

The first things that you notice about this production are the visuals, as this production merges the latest cutting-edge technology to create animation techniques that not only often tell a part of our story and provide much of the background, but also integrate with the live performers on stage. The physical stage space itself is essentially an empty one. Theatre is changing and technology like this is allowing physical spaces to be used in completely different ways from the days of traditional stage-set builds, and making touring a production an entirely different logistical exercise.

This does, however, come at a price as the creative teams behind this technology are often large, the work highly time consuming, and the expense high. This new blend of high-tech theatre is clearly one for companies with a large budget to work with. Having said this, when it is done well both creatively and innovatively, the results, as here, can create an amazing theatrical experience, one which other media of entertainment cannot give.

The second thing that you will notice is that this is not a traditional story telling format, but one told through the language of contemporary dance.  In this retelling of the Jungle Book, the highly respected Akram Khan and his company bring to life through the dancers on stage and creative choreography all of our favourite Jungle Book characters and the many animals around them in the language of dance.  This is accomplished by the dancers using their bodies to often become the animal that they are bringing to life on stage.  The actual story is told in pre-recorded audio and at first I found this a little detached from what was happening on stage, but then realised whether intentional or not, that this format was a bit like the audience being read the story in much the same way as a parent might have read the original Jungle Book to a child, or even a child reading the story out loud. This format also fitted in perfectly with some of the old folk and creation stories that we were told too.

Climate change is no longer a debate of true or false, but one of “just how bad will it be”, and this is the poisoned legacy that we are passing on to the young of this world and the generations still to come. In the end, coming generations will be the ones that have to solve, or at least limit, the consequences of climate change, and as this new story tells us (as did the original), this world belongs to not only man, but every living creature in it, and only by working in harmony with one another and working in harmony with nature will there ever be the hope of any solution, no matter how small, to this coming environmental catastrophe that will effect every living thing on Earth. This is The Jungle Book story for our times that must be told and re-told in the coming years ahead.