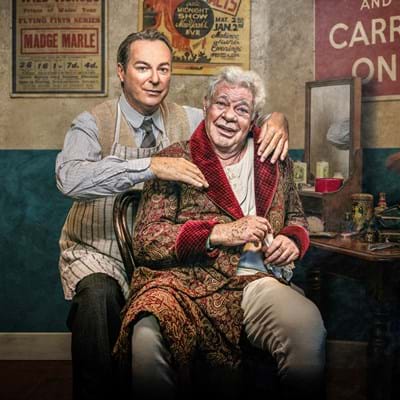 The Dresser is at the King’s Theatre Edinburgh this week (Tue 15 Feb to Sat 19 Feb) and this show is, as always, going to be pulling the crowds into their seats.  Since its first performance in 1980, “The Dresser” by Ronald Harwood has become one of the best loved theatrical works of the last 40 years or so, but I find it curious that watching it now, we are as far away from the 1980s as the original production was away from its 1940s wartime setting for the play, and perhaps that is in parts why I am having a few problems with this show.  Time as always moves on and seems to be most cruel at times to drama and in particular comedy, and although the opening sounds of “The White Cliffs of Dover” might have been powerfully evocative and nostalgic to many audience members in 1980, do we still feel the same now in 2022?  Although this is a fine work of theatre, it is showing signs in too many places that it was written for a different time with different perspectives to what we now have on many things.

This work is always going to revolve around its two principal characters – our now almost delusional fading star of an actor, Sir (Matthew Kelly) and his devoted dresser and confidante Norman (Julian Clary), and to get a very close relationship like this right on stage takes a lot of rehearsal and two very special talents together to make it work. Tonight, due to illness, Julian Clary was not performing and the role of Norman was played by Samuel Holmes, and it is a huge credit to him that he was able to step into such a narrative driven part as this at such short notice.  Sadly, Samuel Holmes was always going to be swimming against the tide here as not only had so many people in the audience come out to see Julian Clary in the role, but also had in their heads their own idea of how he would be performing it.  That lack of rehearsal and performance time needed with Matthew Kelly to bring the at times wonderful script of this story to life was showing, but in the true spirit of this story, “the show did go on” and I am sure that given the opportunity and more time, Samuel could stamp his own identity on the role of Norman. For the moment though I was getting none of that sense of utter devotion that Norman has to Sir, or that strange and at times very strained relationship that both men have with one another, almost a marriage I suppose.

Matthew Kelly was obviously very comfortable in his role as Sir, and his portrayal gave us the self-interested and by now almost delusional actor who was clearly struggling with his own mental and physical health problems. The fact that I felt so often that Sir should not be on stage performing in this emotional and physical state is a huge tribute to Matthew Kelly’s ability to make us believe in this character.
The dialogue between Sir and Norman is of course what is driving so much of this work, and although some of it is so well written, there is that feeling to me that so much of the story between the two actually lies in the unspoken spaces between their lines, and it is here in their body language and at times silence that so much can be said, and that is probably where that simple lack of opportunity to build on that as a performance relationship was showing between Matthew Kelly and Samuel Holmes tonight.

Oddly, for a story so much about the relationship between two people, I was finding the relationships between Sir and Madge (Rebecca Charles) and Sir and Her Ladyship (Emma Amos) far more interesting, and the ones that gave us real insight into who Sir really was when offstage.

Credit for making so much of the backstage world such a believable one in this show must also go to the Director (Terry Johnson) with very good set/costume (Tim Shortall), lighting (Ben Ormerod) and sound design (John Leonard)  all helping to give that odd feeling of a theatre within a theatre that you get from this show as a member of the audience.

The promotional material for “The Dresser” describes it as an “affectionate and hilarious portrait of backstage” but I am sorry to say, for me, that affection was all too often not there and what could at best be described at times as “black comedy” was actually a sad, distressing and at times depressing portrayal of a man who was clearly having a severe nervous breakdown and unable to cope with his life or anything and anyone around him, and thankfully in 2022 we have started to understand mental health issues a little bit better, hopefully be more tolerant and supportive to people with them as a society, and not to find the mental fragmentation of another human being as a source of humour.  For me, The Dresser is at times a work simply now out of time in this and other respects as we are now on the other side of the #MeToo movement and how we view being gay in our society as a whole.