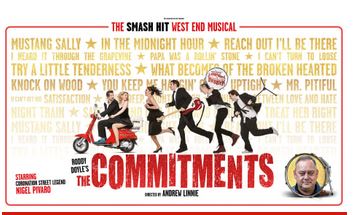 The Commitments is at The Playhouse Theatre Edinburgh this week (Mon 28 Nov - Sat 3 Dec) and if you have any liking for those classic soul music sounds of yesterday, then this should be the show for you…or should it?

Starting with the original book by Roddy Doyle in 1987, followed by the hugely successful film in 1991 and an equally popular stage show (first performed in 2013), “The Commitments” has over the years simply become a legend in its own lifetime.  This new production, on paper, has everything you would expect to continue this winning streak – some very experienced cast members, writers, directors and a very successful production team and company behind everything, plus of course the music, so everything should have been a perfect blend of theatre and great soul classics tonight.  What then has gone wrong?

I have to admit that despite being a lover of soul music in all of its many variants since the early 1970s, that I have not to date either read the original book or seen the film, and this was my first visit to the stage show, so this review is based purely on tonight’s performance.

The problems for me start very early with this story, and although I accept that we need to establish exactly who everyone is here and why they want to start a soul band, that rather chaotic and at times directionless meandering to find them takes up most of Act I leaving very little time for the music. This is not an uncommon problem in a show like this, but here I still got no real idea who these people were, and why they would want to come together to form a soul band.  Perhaps that is the story itself, it just seemed like a good idea at the time.

One of the first disappointments of this show will be the replacement of Nigel Pivaro (Of Coronation Street fame) by Ed Thorpe in the dual roles of Jimmy’s Da/Caretaker and the limited on stage time gives Ed little room to make this role his own.  Also this evening, the lead role of band singer Deco was not performed by Ian McIntosh, but by James Deegan, and despite some solid performances in this role, other factors in this production were I think limiting his ability to do much with many of these classic soul songs.  James Killeen as Jimmy, the local music guru, band manager, and general lad about town brought much to this role, but the chaotic nature of this story left so many unanswered questions about who he really was and why he loved soul music so much. If there were reasons, they were lost too often in a political rant of often divergent thoughts.

The Commitments is an odd work of theatre at times, both vocally and dramatically, with the story constantly shifting between all of “The Commitments” and there quickly becomes a lack of any real focus to both narrative and songs. Oddly though, this does create a show where, like being in a band, everything is a group effort, and that is what I am basing this review on, everyone and not any single performance. The choice to have the music played by the band as a whole and not connected to any single character in the show works in some cases, but in others gives a very dislocated feel to the story at times. Soul music, for me, is very personal, and this approach I was finding a little odd at times.

There are so many classic songs in this show and this audience should have been reacting to them from very early on this evening, but for the most part they were not and although Act II improved a lot in this area, the only real connection, the only real get up on your feet moment was right at the end of the show with the much over-used and very lazy format of a quick run through some classics.

There are so many interesting people in this story, but for some reason their stories are not coming across to me and that is a pity, but perhaps the biggest disappointment for me this evening was that all too often that driving rhythm section, those incredible harmonies and voices that can break your heart with a few words were simply not there. Whatever it is that made soul music so special to me all those years ago and has kept it close to my heart for all this time simply was not there for far too many songs in this show. Part of the problem to me is that for some reason those very distinctive sounds of three very different soul sounds and record labels – Motown, Stax and Atlantic - were poured together into a musical melting pot that blended everything together and all too often created indistinguishable and bland karaoke, and the words, the wonderful words of so many of these great songs were just not delivered from the heart as soul music should always be.