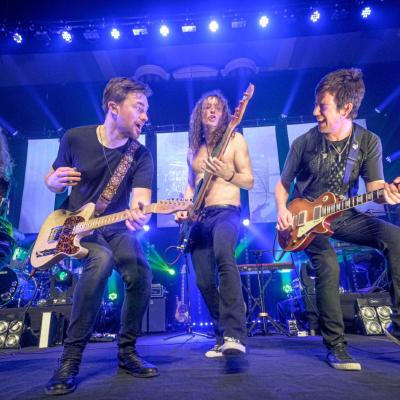 The Classic Rock Show returned to Edinburgh and The Queen’s Hall tonight after an all too long period of absence, and the team looked and sounded sharper than I have seen them in many years. Like so many performers out there, that pleasure of being able to be back on stage and perform to a live audience was obvious and everyone, band and audience, was making the best of the evening. If you have not been to one of these “Classic Rock Shows” before then try and catch up with them somewhere on their extensive touring schedule as you never know from tour to tour what is going to be in their “non-stop live jukebox”.

There is no pretence from any of the performers in this show, as they say, they know that they are not the original performers of these songs, but they love these songs and want to share that love of the music with their audience.  The songs played may not be from the original artist, but make no doubt that there are some impressive levels of musical and vocal talent on stage, and this can sometimes be all too easily forgotten as people will often immediately associate what is being played on stage with the original bands.  There is also an almost hidden high level of skills in arranging many of these songs to suit best the talents of our on stage performers, as musicians and vocalists are interchanged to give the best possible performance of a song, and often this is done so subtly that it still all sounds as you remember it.  Sometimes the “band” takes a different approach  and as with “Hotel California” (The Eagles), takes a note for note approach taken from the original version.

What was in our “live jukebox” tonight then?  Well, I am never going to give that away in a song for song review, and the musical spectrum is a broad one, but as always, the CRS team know that for every favourite they play in the show, someone else has to have their favourite missed out as it is simply impossible to cover every song in a show like this. As always though, they got the set-list pretty much right for everyone to at least have some of “their songs” performed tonight.

With the opening songs, “Back in Black” (AC/DC) and “American Girl” (Tom Petty) the team had the attention of this audience from the start of the show and many bands that you would expect were represented here including Led Zeppelin, Deep Purple, Dire Straits, Boston, Rush and many more. Some surprises too from the Rolling Stones and Aerosmith. A nice reminder to with “Get Back” that The Beatles also left us some classic harder rock anthems to remember. A little tinge of sadness too tonight as we all remembered just how many of these great original performers are sadly no longer with us and an appropriate point in the show to pay musical tribute to Meat Loaf with “Bat Out of Hell”.  The great songs by female artists were not ignored tonight either with “Black Velvet” (Alannah Myles) and “Total Eclipse of The Heart” (Bonnie Tyler) with Jess Harwood impressive as always on vocals.

The Classic Rock Show team by its very nature can be a bit of a changing line-up of talent, but this line up has been consistent for the most part over the last few years with James Cole (vocals/guitar), Wayne Banks (Bass/Vocals), Pete Thorn (Guitar/Vocals) and Henry Burnett (Keyboards). The use of different vocalists to best suit the song has always been a strong feature in this show and Rudy Gardenas and Jesse Smith both also complement each other well when required.  Both vocalists are perfectly suited to their main songs, and CRS show have, as they of course know, a unique “rock” voice with Jesse Smith who makes it easy to forget just how difficult some of these “rock classics” can be for any vocalist to perform.  Keeping everything on a steady beat tonight was the newest addition to the team Tim Brown (Drums).

I have been reviewing The Classic Rock Show whenever it comes to Edinburgh for some years now, and it is always fun, the team don’t travel light, there are a lot of guitars and a lot of stage show here, but perhaps more important than anything is that this show always has a very friendly atmosphere to it and the age range of the audience is large, ranging from people too young to ever remember any of the songs first time round to many who will have bought the original vinyl records of the day and probably have seen many of the original bands as well.  For those old enough to remember, it is always nice to hear the music once more, but the CRS team can also do something very special and as they play people’s favourite songs it can be a pleasure just to sit and watch as many members of the audience are taken back in time to their own youth and many happy memories of times past.  Being able to do that for people is a special gift and the CRS team understands that very well.