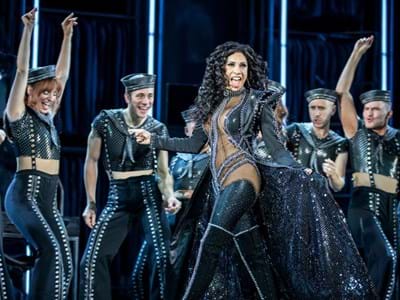 The Cher Show A New Musical is at The Festival Theatre Edinburgh this week (Tue 11 to Sat 15 Oct) and if you are a fan of Cher and her music then you probably will not want to miss this show.  If you are not a big fan of the lady and her music, then it is still worth giving this one a chance.

How did a shy young from girl from El Centro, California, born Cherilyn Sarkisian, become a recording star, a theatre stage star, a movie star, and a global icon to many people? Well, fate certainly seemed to have had a hand in some of the answers but, as we find out in this show, sheer talent, strength of will and personal determination also played their part in creating “Cher the entertainment icon” too.

I tend not to give too much of any show away when reviewing it, but a little bit of background is needed here. The show starts with a now 50 plus year old Cher in her dressing room about to step onto a stage and make her comeback as a singer, and she is very hesitant and doubting for a moment her own abilities to do so. The show ends as it starts with Cher finally stepping out onto that stage, but it is what happens in between this perfect circle of events that the story unfolds as this is a real stage musical and not a Cher tribute show (there is a big difference).

What makes this story really work is that from that very first moment in her dressing room Cher is asking her own self many questions, confronting her own story, her own highs and lows both personally and professionally in life.  Also, Cher is looking back in her mind at her own self at different points in time, asking younger versions of herself questions and seeking their advice. This is something that I think we all do as we get older and this clever storytelling device is something that many of us can relate to.  What advice would you give to your younger self if you could?  None would be the answer to that question for most of us as we would not listen anyhow.

The Cher Show A New Musical is obviously a celebration of Cher and her music, and there are so many classic songs here from both the early Sonny Bono times including of course  - “I Got You Babe” and “Bang Bang (My Baby Shot Me Down)” to later iconic songs  from the glorious comeback years and  “Believe” and “If I Could Turn Back Time” of course have to be in this show too. In between these two points in Cher’s life there are of course the television shows, the Las Vegas residencies and a lot of life story to be told, and whereas many similar shows tend to drag a little bit whilst they tell the story leading up to the ending that we all know, this show, by clever use of songs old and new manages to cover a lot of time in Cher’s life in a fairly short time on stage and you never feel that the momentum of this show is slowing down at any point in time.

To achieve the above you need a good script (Rick Elice) and direction (Arlene Phillips) and of course a good cast on stage, and this show’s three Cher’s - Millie O’Connell as BABE, Danielle Steers as LADY and the Debbie Kurup as the ultimate diva, STAR all put in some very good performances both vocally and, for the most part, as story tellers. There are good performances too from Lucas Rush as Sonny Bono and Tori Scott as Georgia (Cher’s mother).

This is the Cher musical so, as you would expect, there are a lot of costumes (Gabriella Slade) and it is interesting to note how these costumes change on our three Chers over the decades and eventually merge into one unified style as our story unfolds, and what a story this one is. All the main ingredients are here, the marriages, their failures for different reasons, the financial and career highs and lows, and much more.

Like any good stage musical though there has to be more underneath the iconic songs and the very tight and well-choreographed dance routines to make it really work, and there is.  Not only do we have that opening theme of personal insecurity and reflection on not only Cher’s past life, but the very different people that she was in those earlier years, we also have a true love story between her and Sonny Bono and the strength that it took to walk away from that life. There are of course other important themes here, a woman fighting not only for her own financial independence and security, but also one fighting for control of her own career without some man always there telling her what to do. This is also a story of having the personal strength to pick yourself up when you are down in this life and somehow simply “carry on”.

This is not a perfect show, but a very good one that could have been made better by a few things and, for me, some insight into how Cher was able to free herself of her exclusive performance contract with Cher Enterprises would have added to this story and taken up little stage time. On stage Greg Allman deserved a better portrayal as having someone just standing there strumming a white guitar as an introduction was a poor representation of a very gifted guitarist and songwriter. I was also expecting a lot more “sing-along” inter-action between audiences and performers on stage in this show, but now having seen the show I understand why they made their opening request. As I have already said in this review, this is a real stage musical (and one with a noticeable production budget) with a good dramatic story line to it, it is not a “sing-along” tribute show; there is of course a place and a time in the show for Cher fans to let their inner Divas out for a little while and join in the fun.