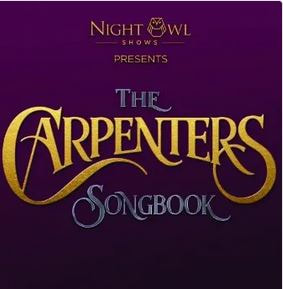 The Carpenters Songbook returns to the Edinburgh Festival Fringe at theSpace @ Symposium Hall and, for an hour or so, Night Owl Productions take us all back in time to many classic songs that for some reason often elude many of us when we think of 1970s/80s music, or perhaps it never seemed cool enough at the time to admit that you liked the music of The Carpenters and were hiding in your musical closet along with ABBA fans.

Time as always though has its own unique ability to separate the good from the bad, and the songs of the Carpenters are still with us for one reason only, and that is that they were such well crafted songs at the time and they have, unlike so many others from this period, survived the test of time, and maybe we need shows like this to remind us of this at times.

Richard Carpenter and often co-writer John Bettis (from their old band Spectrum) not only had a gift for recognising a potential hit but Richard was also adept at weaving choral harmonies into many of his arrangements and self/co-penned songs, a trend that went against much of what was perceived as marketable by many in the record industry at the time.  Within the limits available at a Fringe show, the Night Owl band manages to capture the essence of this in their arrangements of these songs.

Behind many Carpenters songs there is often a very classical music structure supporting everything, and perhaps this is a reason why so many were chart topping records; Richard and Karen knew how to construct songs of real musical depth.  Add into that the vocal talents of Karen Carpenter who was eventually and rather reluctantly forced out from behind her drum kit (from where she sang) to the solo vocalist spotlight, and the combination of singer and song was a huge artistic and commercial success. The change was, however, far from a personal success for either brother or sister and as we learn, both struggled with their own inner demons and sadly only one was to survive these struggles.  Listening to the at times very upbeat and sunny songs that we always associate with the Carpenters it is at times difficult to balance this sound now with what we now know about their darker private struggles as performers and as human beings.

What was left behind though was a legacy of classic and timeless songs including “Close To You”, “Top Of The World”, “Goodbye To Love”, “We’ve Only Just Begun” and as many more as it was possible to fit into the time constraints of a one hour or so Fringe show. No “Calling Occupants of Interplanetary Craft” though and, although it was never cool at the time to admit it, I’ve always liked that one.

Bringing these songs to life on stage were the Night Owl Band and singer Reine Beau Anderson Dudley who has the vocal range to do these songs justice, but in her own presentation and delivery style. As with all Night Owl shows, this one is a tribute to the music, not an attempt to be a sound-alike impression of any of them. Just as important as the songs, Reine Beau also has a presentation style for this show that matches that air of calmness, and gentle laid back ease that The Carpenters so often seemed to be able to create in their music.