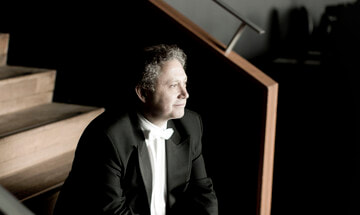 The Brandenberg Concertos this morning was the last in this year’s Edinburgh International Festival classical concerts at The Queen’s Hall, but it was well worth the wait. For this performance, British harpsichordist and conductor Richard Egarr lead a hand-picked ensemble of talented period musicians from across Europe and further beyond to bring into life one of the world’s most recognisable and popular collection of concertos by one of the most popular composers of all time - Johann Sebastian Bach.

As well as the music, Richard Egarr also gave us all some quick, but highly informative, facts about the concertos that we were about to hear, including their background history of being presented to Christian Ludwig, Margrave of Brandenburg, in 1721. The concertos are considered by many to be part of a hopeful job application by Bach to the Margrave (a member of the German nobility corresponding in rank to a British marquess) and designed to highlight his skills as a composer across a large range of instruments.  The Margrave,it seems, was not that impressed, Bach never got the position that he was hoping for, nor his music back, and what was later to be called The Brandenburg Concertos were it seems forgotten about until, eventually, they ended up being found by the custodian of the Prussian royal library in 1849.

Every one of the six concertos performed for this concert has their own very distinctive arrangements for small orchestra (but still larger than a usual concerto ensemble), and any one alone could more than fill this review, but time nor space allow this, so a general overview is all that is possible here.
Anyone who has heard the Brandenburg Concertos will, for many different reasons, have their own favourite, and their different approaches to orchestration and composition are diverse, but as Richard Egarr entertainingly enlightens us with facts, we find out that they also share many common themes too. Here Bach is constantly challenging the order of the day in how to compose a concerto. He is also introducing many of the newer instruments that were starting to become more popular with orchestras and scoring them in this newer style. At the same time he was also writing in a far more traditional style for older instruments such as the viola de gamba and violone which were at the time becoming less popular in their usage by orchestras, so it was good to see them on stage today and this music having the authenticity of instrumentation that it deserved.

Perhaps the most recognisable of the concertos is the third, and again Richard Egarr gives us more insight into this work by briefly introducing us to this work and to Bach’s other interests of mathematics and in particular numbers, with the number 3 (the Holy Trinity) and the number 7 (God and Creation) in this work and how it is composed, and this for me added a whole new layer of meaning to the music that I was about to hear.

Richard Egarr is well known for his skills on the harpsichord, so concerto 5 which pushed the harpsichord into solo prominence (for the first time ever) was an obvious personal favourite for him, but his love and enthusiasm for all of these concertos, and for the work of Bach, shone through every moment of this concert.

To name all of the individual musicians involved in bringing these concertos to life would be a long list, and to omit anyone would be unfair. Here, every person was a joy to listen to and their pleasure at getting the opportunity to perform these wonderful concertos live was obvious. The reason why after some 300 years the music of Bach is so popular needs no explanation really, just watch and listen to how any musician and most audiences across the world react to it. This music simply transcends both place and time.