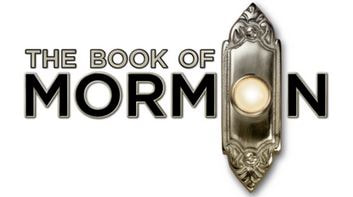 The Book of Mormon is at the Playhouse Theatre Edinburgh from 13th September to 8th October and if tonight is anything to go by, the theatre has a busy few weeks ahead. Since its first performance in 2011, this show has swiftly become a worldwide hit with both critics and audiences alike and a huge commercial success story. Having not yet seen the show I wanted to see if it justified this lofty position in the hierarchy of stage musicals of the 21st century.

The creators behind “The Book of Mormon” are certainly no strangers to success and Trey Parker and Matt Stone (South Park) teaming up with Bobby Lopez (co-writer of Avenue  and Frozen) obviously was a match made in heaven, but whose version of heaven? That is the big question here.

The title of this show pretty much tells you everything about this show, and this satirical examination of the beliefs and practices of “The Church of Jesus Christ of Latter-day Saints” does underneath the “in your face humour” and “bad language” have some serious commentary to make not only about the Mormon religion, but how Christianity, in all of its variant forms in the West, has interacted with the rest of the world in the last few centuries, and with Africa in particular. Sadly as we follow the adventures of Elder Price and Elder Cunningham as they are paired together to spread the word of their beloved book and faith, a lot of the potential for sharp and biting satire is just lost amidst one dimensional characters, one dimensional points of view and one joke (well maybe two or three at most) that all too soon starts to wear all too thin.

No one believes more in his faith and in himself than Elder Price, so he expects to be rewarded for a lifetime of devotion by being sent to his favourite place on earth for his two year ministry – Orlando in Florida and Disneyworld.  Instead he gets sent to a remote village in war torn Uganda. If this was not enough to test his faith then his chosen companion Elder Cunningham certainly is. To be fair, Elder Price (Robert Colvin) and Elder Cunningham (Conner Peirson) do make a good comedy duo and their “fall guy” routines have some charm to them at times, but not enough to last a show of this length for me.
Maybe part of my problem with this show is, I have to admit, simply me. I have never found the humour of South Park to be something that engaged me, and bad language in a script simply for what appears to be nothing more than childish shock effect has never worked on me either.

Perhaps part of my problem with this show is also cultural as I don’t come from a place where that unexpected ring from the doorbell can mean one of two things – either the Avon lady is calling or the Mormon elders are out spreading their gospel - and much of the humour in this show is American. This show is, at times, uncomfortable viewing and I have to admit that maybe here its creators have done their job and forced us to look at truths we would rather not want to see or even admit are there.

As is often the case for me, I find secondary characters and story lines more interesting than the main ones and this show is one of those times with the young Ugandan girl Nabulungi (Aviva Tulley) and her song about the told to her wonders  of “Sal Tlay Ka Siti" (Salt Lake City) give, if you listen to the words, a heart-breaking view of two different cultures and worlds. This is the song of the show for me, not “Hello”.

I can see moments in this show why it has been so popular, why it has won so many awards as there are some subtle and not so subtle “nods” to other stage musicals, a mix of popular cultures (mostly Star Trek and Star Wars) and some good song and dance routines, but some of the attributes made to this show are for me the work of Elder Cunningham’s “creative imagination”. Sadly, I left this show still not understanding why “The Book of Mormon” is so popular, but pretty much everyone else in the theatre tonight seemed to know the answer to my question, so it simply has to be that this show, like the real “Book of Mormon” (and all other religions) is in the “eyes of the beholder”.