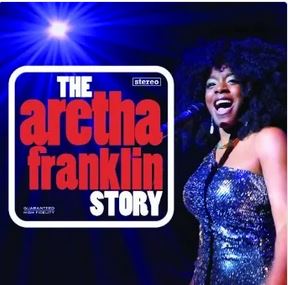 This is one of 10 shows that Night Owl Productions have at The Fringe this year and, as with all the others, the format is pretty much the same – some background history of the artist and cover versions of some of their best-known songs. It sounds a simple formula, but it is one that Night Owl have pretty much perfected as the “Night Owl Band” of singers and musicians often work other shows in the schedules to best effect wherever their talents are needed best. It is a formula that works, show after show, Fringe after Fringe and usually to sold-out shows.

This show (and its sister one The Tina Turner Story) for me stands out from the others for one simple reason, Cleopatra Higgins on lead vocals, and this afternoon’s performance was just another stand out performance from Cleopatra, and that “wow factor” is every bit as much here now as when I first saw this show in 2019 (first time it was here).

What took me to this show the first time was the songs of Aretha Franklin, and to be honest I almost never went along as over the years I had seen and heard too many “bad cover versions” of Aretha’s songs and did not want to see any more. I was persuaded to go, and found one of my favourite shows of the Fringe that year.  What brought me back to see this show again was not actually “The Aretha Franklin Story”, but the chance to see and hear Cleopatra Higgins performing live on stage again. This is not a tribute show, this is not someone trying to be Aretha Franklin, this is one very talented singer/performer putting her own unique stamp and identity on some of the best known songs of Aretha, and Cleopatra can do them all from church gospel, to classic soul, to upbeat pop with a natural ease that at times masks just how difficult some of these songs are to sing as they should be sung.

This was a pretty much perfect show for me, songs of one of my favourite singers of all time, some of my favourite songs, and songs by some of my favourite composers.  Any show like this can of course only skim across the surface of the recorded output of Aretha Franklin, but there are some instantly recognisable musical gems here including, R-E-S-P-E-C-T, Say A little Prayer, (You Make Me Feel Like) A Natural Woman and many more.

This show pays tribute to Aretha Franklin, her life and her music, but the vocal performances by Cleopatra Higgins and her obvious love and respect for both Aretha Franklin and these songs raise this show well above what you would normally expect to find at most shows of this genre.