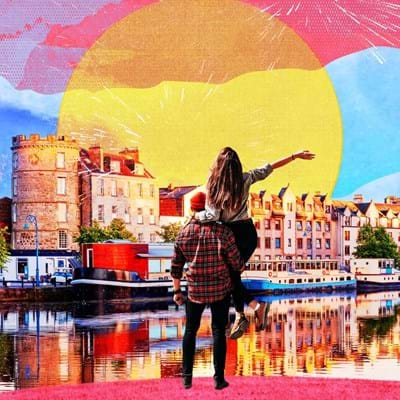 Sunshine on Leith is at The King’s Theatre from Tuesday 07 to Saturday 18 June and if you are a fan of The Proclaimers’ music then this show is an obvious choice for you as it features many of their best known songs, including of course “Sunshine on Leith”.

Sunshine on Leith was originally written by Stephen Greenhorn for the Dundee Rep ensemble and first performed in 2007. There has also been the 2013 film,and this new production from Pitlochry Festival Theatre and Capital Theatres clearly, from the pretty much sold out theatre this evening, shows that the show and the music of the Proclaimers are still as popular as ever with audiences.

I have to admit that before coming to review this show I had some reservations about it as productions using songs as their core story rarely work out that well, and the Leith of upmarket wine bars and endless coffee shops that our two soldiers, Ally (Keith Jack) and Davy (Connor Going) return home to is one far removed from the Leith of my far earlier childhood memories.

Somewhat to my surprise, I found “Sunshine on Leith” to be one of the best stage productions that I have seen in a long time, and a large part of that success has to go to very skilful new musical  arrangements of the original songs by David Shrubsole. It is these new arrangements that allow the lyrics of The Proclaimers’ songs to somehow fit naturally, and often seamlessly, into an already very tight story about life, hopes and dreams, love won and lost and unexpected twists to all of these things. There are also more than a few Leith references and “in-jokes” here plus an at times “black humour” that many people from Leith (and Scotland in general) will identify with.  A clever and minimalist use of space on stage by set designer Adrian Rees also worked well for this show, and for me this evening, as all of our story takes place underneath the skyline models of Edinburgh and Leith. This allows plenty of space for our main cast and live band to perform without being tied down to fixed set spaces.

As with all good stories, Sunshine on Leith is a little bit like a Babushka doll with stories within stories unfolding and interweaving as they do with each other as we follow Ally and Liz (Blythe Jandoo) as they try to pick up where they left with their relationship while Davy and Yvonne (Rhiane Drummond) are embarking in their new relationship.  For me though the real story of interest so many times in this show was the unexpected changes in the life of Davy and Liz’s parents Jean (Alyson Orr) and Rab (Keith Macpherson) and it is into this story arc that our show’s title song “Sunshine on Leith” not only fits in so well, but has so much power and emotion, and it is rare that a song not written for a specific scene like this works so well.

I had, to be honest, sort of forgotten over the years just how good the songs of The Proclaimers (Craig and Charlie Reid) actually are, and songs like “Letter From America”, “Misty Blue”, “Make My Heart Fly” and of course, “Sunshine on Leith” and  “ I’m Gonna Be (500 miles)” swiftly corrected that oversight this evening.

There are no weak performance links in this cast, everyone just seems well cast in their respective roles. For some reason though that relationship between parents Jean and Rab just always seemed to have that extra layer of depth to it for me as Alyson Orr and Keith Macpherson had that extra emotional depth to their story and background from the beginning in the script.

Sunshine on Leith is of course a show that is not just for Leithers or people from Edinburgh, it is a story that pretty much everyone can relate to.  Performing this show in Edinburgh at The King’s Theatre must have been a bit special for the cast tonight as not only are they bringing this story home to its settings, but this is sadly the last show (apart from some EIF performances) before the theatre closes for major re-development, re-opening in 2024. This much loved theatre is going to be missed by performers and audiences alike over the next two years.  Another important fact about this production is that it also marks a return to Capital Theatres (King’s, Festival & Studio) in producing/co-producing their own productions that have a very specific Scottish interest to them. The next production is James IV Queen of Fight by Rona Munro at the Festival Theatre in October.

If you get a chance to see “Sunshine on Leith” take it, as this is simply a show that is despite the darkness at times of its story line one filled with much humour and of course songs that so many people will not only recognise but know every word to.

Somehow, and very importantly, this show also never loses sight of the fact that Leith and Edinburgh have often very subtle, but ultimately very different cultural identities, and being in Leith never feels quite the same as being in Edinburgh (well to me anyhow).  Leithers are very proud and very protective at times of their unique identity as this show respects that in its story.