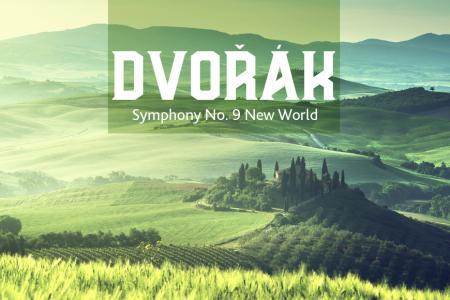 The 2022/2023 Sunday Classics season at The Usher Hall Edinburgh got off to a well-received start this afternoon with Brno Philharmonic and the highlight of the programme today, Dvořak Symphony No. 9 (aka the New World symphony). This ever popular work by Czech-born composer Antonin Dvorak (1841 to 1904) is a fine example of how classical music is, and always has been, part of our musical background, particularly in a modern world where film and television seem to have an inexhaustible need for music.

Composed and also premiered in 1893 while Dvorak was director of National Conservatory of Music of America from 1892 to 1895, "From the New World", is his musical and emotional response to not only this new land but also the customs of its people and their diverse musical and cultural heritage. If you listen closely, it is all there, including Dvorak’s new found interest in native American and negro spiritual songs and music.

Even people who say they do not know any classical music will probably know at least part of this symphony, and the second movement is forever a part of many people of a certain age’s television memories as here in the UK this was the music to the much loved “Hovis Bread” advert (first aired in 1973).  For many, this classic advert will forever associate parts of the second movement of this symphony with north of England brass bands, and whilst this shows the flexibility of this music, it is also important that people do not miss the sublime beauty of the horn, string and wind instrumental arrangements in this work. These arrangements, like the rest of this symphony, were brought into full life and colour by conductor Dennis Russell Davies and the Brno Philharmonic.  It is of course more than apt that an orchestra from Brno (located in the south-eastern part of the Czech Republic) should be performing the music of one of their greatest composers.

Whilst looking forward to a new dawn there is also that tinge of, if not sadness, then certainly a melancholy longing for the land of your birth, and in Dvorak’s case this was not only a physical Bohemia, but a spiritual one too.  This sadness of heart is also maybe the reason why parts of this symphony make me think of not the sun of a new dawn rising, but a sun setting late in the evening on some forlorn battlefield.
One could write whole books, not just a review (and many have) on this work.  With this symphony did Dvorak make the transition from European classical music to help create something new, American “New World” classical music?  That debate has, it seems, never been fully resolved. One thing is clear though and that is to truly experience it in all of its vast array of sounds, intricacies, layering, colours, and sounds, you really need to hear this work like it was performed today, in a classic concert hall like the Usher Hall.

Continuing with our theme of Czech music this afternoon was a short 6 minute symphonic poem by Czech composer Leoš Janáček (1854 to 1908) “Jealousy” whom I know best for his very dark opera “Jenufa”. Written at the same time that Janáček was working on Jenufa, there are obvious similarities in many areas between the two, especially in the emotions and colours of this short work, but somehow, although it could easily fit into the larger work, this “poem” also clearly stands alone in its own world.

New to me this afternoon was the work of another Czech composer, Bohuslav Jan Martinů (1890 to 1959) and his Cello Concerto No. 1, and this work, originally first composed in 1930, is one of the few times that the composer ever revised any of his works.  This work was also an introduction to me to one of the rising talents in the classical music world, cello player Laura van der Heijden.

In perhaps a contrast to what was to follow, this afternoon’s performance opened with a fine performance of work equally rooted in the musical traditions of a land, this time England and Ralph Vaughan Williams “Fantasia on a Theme of Thomas Tallis”. The theme is by the 16th-century English composer Thomas Tallis and, as always in his work, Vaughan Williams captures in his music something that is often timeless and almost mystical, a gateway at times to a place that his music invites us to enter.  This work also of course reflects the composer’s life-long passion for collecting and recording in often very detailed notes English folk music and songs so that they could be preserved for future generations to research, enjoy, and of course sing, perform and listen to.