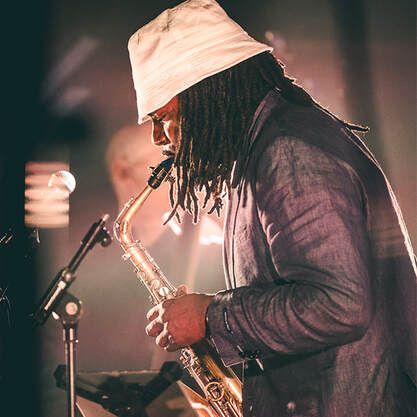 Soweto Kinch Trio were performing at George Square Spiegeltent as part of the Edinburgh Jazz and Blues Festival 2022, and although it took me a few songs to get below the surface of the music and words of Soweto Kinch himself, what I found was of interest as he is obviously someone who chooses both with great care.

This is my first encounter with Soweto Kinch and his music, but it is easy to see how this multi award-winning alto-saxophonist, MC and composer has made such a name for himself on the UK jazz scene. The way that Soweto uses jazz, rap and freestyle lyrics is a much needed breath of fresh air into a music scene that all too often looks to the past rather than the future and one that desperately needs artists with something new to say to attract a new and younger generation of people into the music, and the way to do that is to connect with that audience in a language and style that they will identify with. Soweto instinctively knows how to do this and also understands (as do all the best composers and writers) how to deliver a sometimes controversial (or simply not wanting to be heard by some people) message in a way that gets this message over with least resistance. To do this, his tools are music, saxophone, rap and words.

Much of the music from tonight’s show comes from Soweto’s latest album “The Black Peril” which uses the little talked about and little known race riots that took place in Glasgow (and other UK cities) in 1919. As someone with a degree in Modern History from Oxford University, Soweto is perhaps better placed than many people to fully explore these events in his words and music and I am sure that he will also be aware that this is the year that over 10,000 police and military tanks were in place in Glasgow to deal with mass demonstrations on January 31st for what was to be known later as “The Battle of George Square”. This event was only 82 days since the First World War had ended and both events give an insight into the world that was waiting for men returning home from so long at war and women and children at home.  Let’s not forget the rent strikes in Glasgow too.  I mention some of this because Soweto clearly understands that history is not about cold facts and dates, that it is a living and breathing entity in its own right and so much of our life now, our cultural identity, and the way that we often think about many things, is interwoven with our past, and that past is often far more culturally interwoven than we think, or may want to recognise at times.

The unplanned chance that Covid restrictions gave many of us for self-contemplation were not wasted on Soweto either and through his words and music it is clear that this opportunity to return to a perhaps simpler moment in time where a greater clarity of the world around him was possible has produced some interesting work.  For one brief moment the noise, so ever present that many of us perhaps never knew anything different, was gone and the industrial world receded into the background to allow the sounds of the world of nature to come forward once more and Soweto, like many of us, seems to have discovered an inner peace for even a little moment in time.

I love words, they are magical little creatures and you never know when or how they are going to pop into your world, so watching Soweto freestyle from words that the audience gave to him from JAZZ MUSIC (one word each letter) was fun to watch and hear. That love of words by Soweto was also present throughout the show, and “Sidewalk Sermon” was a fine example of their use.  When he chooses too, music is also his words, and there is so much musical contrast here to choose from, so I will pick two, “Dawn” and “Revival Time” as the ones that got my attention the most.

On stage with Soweto Kinch for this set were Jason Brown (drums) and Nick Jurd (bass).