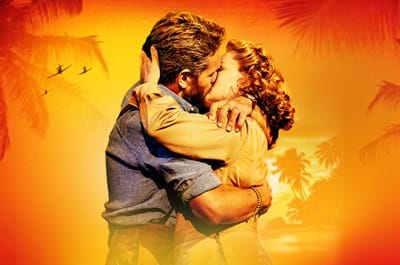 Rodgers & Hammerstein’s South Pacific is at The Festival Theatre Edinburgh this week (Tue 25 to Sat 29 Oct) and if you like your classic musical theatre shows, then this one, a Chichester Festival Theatre production, should be on your “go to” list.

First performed as a stage musical in 1949, South Pacific is based on “Tales of The South Pacific”, a Pulitzer Prize-winning collection of sequentially related short stories by James A Michener. These stories were written in 1946, published in 1947, and are based on observations and anecdotes that the author collected whilst stationed with the US Navy in the Pacific during WWII. This firm grounding in factual events gives South Pacific, the musical (and later hugely successful film), a “realistic world” to play out its story upon that few musicals of the period have.

South Pacific is for some reason one of those musicals that I struggle to name more than a few songs from, but this evening it was clear that I had forgotten just how many classic songs are in this show, including “Some Enchanted Evening”, "There Is Nothin’ Like A Dame”, and “Happy Talk”.

At its heart, like so many classic stories, and particularly musicals, this is a story of love won, love lost, and in some cases love won again, and that central relationship here is the one between plantation owner Emile de Becque (Julian Ovenden)and Ensign nurse Nellie Forbush (Gina Beck).

In most musicals from this period there is always going to be that almost surreal fantasy moment of people spontaneously bursting into song during normal conversations, and South Pacific is no exception, but here the music and the lyrics of Rodgers and Hammerstein are so good that everything flows easily and nothing ever seems out of place.  A big part of this success is of course down to the skills of the cast, and Gina Beck and Julian Ovenden seem perfectly suited for their roles.  Both have not only the dramatic skills required to make their characters come to life on stage, but also the performance skills to not only do these classic songs justice, but to do them in a classic musical of the period style, and that is not an easy thing to do. Julian Ovenden does need a special mention here for having one of the finest voices for a stage musical that I have heard in a long time.

We of course have other love interests (and love hopes) going on here; the relationship between Lt Joseph Cable (Rob Houchen) and south sea island girl Liat (Sera Maehara) is also central to this story.  A special mention too needs to go to two supporting characters who are very much part of the glue that holds this whole story together – Luther Billis (Douggie McMeekin) and Bloody Mary (Joanna Ampil).

South Pacific is an odd musical, as underneath that bright Pacific sun and idyllic island paradises there are actually many layers of darker story lines being played out. One of those story lines is of course how these islands and its people found themselves caught up in a war, a power struggle between two opposing military powers. The other story is unexpectedly for its time a direct commentary on racism by skin colour and for me, the most important song in this musical is “You’ve Got to be Carefully Taught” and with verses like the one below, it is pulling no punches

This production of South Pacific is a big budget production and a lot of care has been taken in impressive detail for both set and costume design. When required a revolving circular stage also makes best use of those stage sets to give us at times that illusion of a movie camera moving around on a film set to achieve different angles of view. Sometimes that revolving stage is also cleverly used in subtle choreography moment.

Taking everything into account, this production of South Pacific is simply a classic musical produced and performed in classic style.
Review by Tom King © 2022
www.artsreviewsedinburgh.com