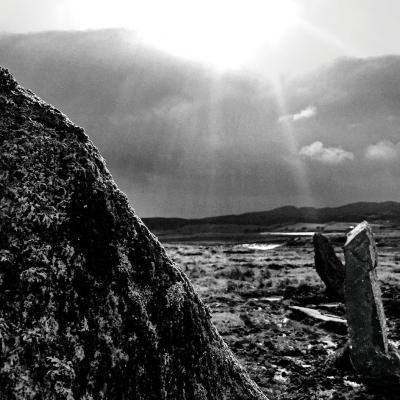 SNJO Tales of The Tribe at the Queen’s Hall Edinburgh tonight was in every sense of the words a unique performance event. Here the title “Tales of The Tribe Song’s For Scotland’s Mythical Creatures” was exactly what Scottish National Jazz Orchestra director Tommy Smith created and delivered and it was a perfect companion piece to his “Beasts of Scotland”. It is some time (1996) since Tommy Smith and poet Edwin Morgan worked together on creating “Beasts of Scotland”, but here in the lands of myths and legend, there is no time and these stories are both ancient and modern simultaneously.

These stories are not only endless, but they are a part of us and we somehow have always had a collective need to come together and hear these stories told, hear these stories sung and hear the music that binds us forever to a timeless line of story tellers. Whether that be a camp fire on a remote hillside or the Queen’s Hall, the time makes no difference, the place makes no difference, as we will always be filled with wonder and perhaps a little fear (even now) at the stories of these mythical beings and creatures.

The creativity that has gone into this work is amazing as four poets – Meg Bateman, Christine De Luca (Edinburgh’s Makar 2014-17), Peter Mackay and Tom Pow - have set the scene over 12 poems with their stories based on the myths and legends of old. Bringing these words to spoken life is narrator Blythe Duff who of course is known to so many people through her television and stage work.  Taking all of these stories, both written and spoken, and weaving the threads that bind them all together is Tommy Smith who not only created the often inspired music for this project, but arranged it so skilfully that the worlds of jazz and traditional music flow seamlessly in and out of each other, a bit like the sea waters of so many of these stories.

Bringing this musical tapestry to life is the traditional music talents of Phil Cunningham, Julie Fowlis, Megan Henderson and Michael McGoldrick and of course Tommy Smith and The Scottish National Jazz Orchestra. The skills of every musician on stage this evening needed to be at their best to bring this story to life and they were; everyone seemed to be at their best and the pleasure that everyone was getting from performing both in their own musical style whilst also crossing over from Trad to Jazz (and vice versa) was obvious and it was clear that every musician here not only enjoyed this experience but gained so much from a visit to each other’s musical world, musical history and musical disciplines.

This musical meeting, merging and crossing over into other worlds is important as “Tales of The Tribe” is re-telling ancient stories of Faerie Queens, Mermaids, Dragons, Water Horses, Trolls and many more legends that seem somehow embedded in our collective psyche.  These are also stories of Scotland itself, the land, the sea, the sky; all three ancient symbols of magic and power in their own right, but whenever one touches the other, water meeting land at the shore, mountain touching sky, sea touching sky on a distant horizon, something magical happens in these “in between” places and that was equally true of the “in between” space where traditional music and jazz music met tonight.

It is perhaps unfair in work like this to single any one person out for their performance as there were so many individually great performances this evening. For me though, one of the great binding threads of this musical tapestry was the timeless voice of Julie Fowlis and somehow I can easily imagine a voice like Julie’s luring many a sea farer to their fate just like some of these old stories tell us. I can also imagine a voice like Julie’s singing to everyone gathered inside, or outside on a winter’s night a long, long time ago.

I have stopped for the most part using a star rating system when reviewing music, and Tales of The Tribe for me proves that this was the right decision to make. When you come across a unique work of creativity like this one, the use of arbitrary stars just seems irrelevant to the work. Here Tommy Smith has created with “Tales of The Tribe” a work that is just as full of magic as the stories of myths and legends that he is re-telling in his own very unique way.