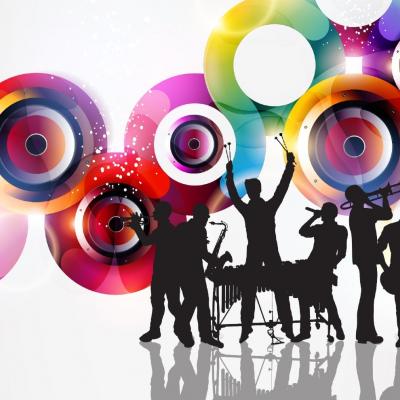 The Scottish National Jazz Orchestra was at Queen’s Hall Edinburgh tonight with their SNJO Pop! Rock! Soul! Concert, and as always the orchestra was more than up to the task of playing, whilst also obviously enjoying performing, a very mixed collection of songs across a wide range of musical genres.

Normally I do not give set lists away in a review, but the SNJO is different as the whole programme is available online, so no secrets being given away here when I say that any jazz orchestra set list that is made up of the songs below is going to face some challenges in arranging these combined works for a full jazz orchestra.

The task of turning all of these very different songs into something very different again for the SNJO whilst retaining their core identity and, at the same time, allowing both the orchestra to perform as one and also when required highlight individual soloists fell to Joe Locke who was also composing his own considerable skills on vibraphone into the works.  Somehow, despite the obvious musical challenges, everything started to fit together in this musical jigsaw puzzle with Joe’s long time friendships with vocalist Kenny Washington and SNJO director/saxophonist Tommy Smith both shining though all evening. Stealing more than a little bit of this show, and deservedly, were the always impressive percussive skills of Alyn Cosker on the almost tailor made for him John Bonham drums of “Moby Dick”.

For me, this re-arrangement (some into instrumental only works) worked on me at different levels, and that is how music should I think always touch you – with no two people having exactly the same response to anything, and whilst I can accept the arrangement and performance skills of everyone involved, sometimes for me pure simplicity is better as more notes do not always tell the story of a song better than fewer notes.  What the performed works tonight did show though was just how all of these songs can be taken apart, de-constructed, re-constructed and re-imagined into endless variations in the right hands (and talents). With these arrangements, Joe Locke also achieved one of his primary goals, and that was to clearly show just how closely the world of jazz has always been to the music of rock, pop and soul. In the end, all of these songs share common roots, and these roots are often deeply embedded in historical cultural adversity.

In the end, for me, Pop! Rock! Soul!  was a reminder that all music is simply a different thread being woven through a vastly complex and endless tapestry of sound and inspiration, and tonight we got to see a few of the songs in that tapestry re-woven in a slightly different way.  There is in the end no good or bad in music when you are at the level of the SNJO and its collaborators, there is only imagination.