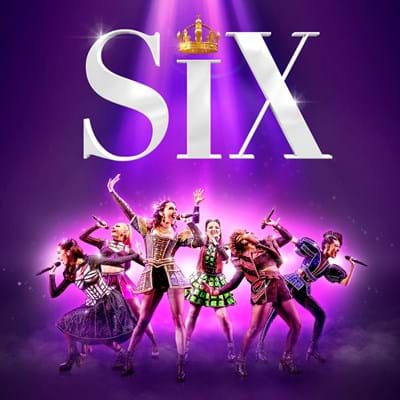 SIX  is at The Festival Theatre for the next two weeks (Tue 15 to Sat 26 March) and this musical, rock concert story telling of the Six Wives of Henry VIII is probably one of the most media hyped stage events of the last few years.  Is it worth all the hype though, and does it live up to its reputation? The answer to that question is, judging by the response of tonight’s audience, and this review, a yes.

This show has of course since it was first presented by Cambridge University students at the Edinburgh Festival Fringe in 2017 become the very essence of theatrical dreams and magic to evolve into a massive hit not only in many venues across the world, but also across a broad spectrum of social media, and that swift immersion into contemporary “pop culture” was clearly evident tonight not only in the age of many people in the audience, but their familiarity with the show and its songs.

King Henry VIII of England reigned from 1509 until his death in 1547 (a period roughly covered in Scotland by King James lV and King James V) and is remembered for many things (good and bad), but for many people he is forever associated with having six wives during his lifetime, and not all of them meeting their death by natural causes. As a musical story, SIX very neatly not only tells a very quick media snapshot history of each wife, but does it in the style of a reality television show with each wife telling her story to the audience in the hope that they judge it the best to allow them to be the one that wins the competition and becomes the band’s lead singer.  With SIX, Toby Marlow and Lucy Moss have created contemporary songs and lyrics that not only resonate with their audience, but also reflect the very individual personalities that they have created for each of the SIX wives. Who wins the contest? Sorry I can’t tell you that as it would ruin any surprises for anyone still planning to go and see this show.

The opening lines of this show – Divorced, Beheaded, Died, Divorced, Beheaded, Survived - pretty much tell you the fates of our duelling SIX wives, but songs like “Don’t Lose Ur Head”, “Haus of Holbein” and “Heart of Stone” skilfully tell the different fates of the wives and their individual personalities. Very contemporary stage design (Emma Bailey), costume design (Gabriella Slade) and choreography (Carrie-Anne Ingrouille) also give SIX that sharp edge of visual production that a show like this needs so much.

SIX is an interesting production in many ways, it is specifically targeted with songs and visuals that will appeal to a perhaps younger than usual theatre audience, it has a shorter running time of one 80 minute act, and is very much bringing the contemporary music experience to the theatrical stage, and I suspect that many more productions to follow in future will use this show format and try to capture a little bit of the success of this show for their own productions.

There was well deserved audience appreciation at the end of this show, and also with a voluntary collection of funds for the people of Ukraine, a reminder that at the moment in this world, not everyone is lucky enough to go to the theatre for a night out, or even to be living life in a safe and secure environment.