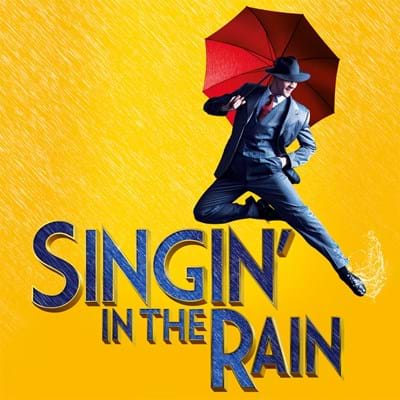 Singin’ In The Rain, the stage musical, is at the Festival Theatre Edinburgh (Tue 26 to Sat 30 April) and in you have a liking for those wonderful Hollywood musicals of yesterday, and one in particular, then this probably is a show that you should not miss.  The musical adaptation of the now classic film has been around for many years (original stage production 1983), and this production, like all of the previous ones, pretty much re-creates the original movie faithfully on stage, and does it very well, with a lot of style and a lot of fun.

It is impossible for me to review this show without mentioning the original film in a little detail as the two are so interlinked, and any production of this show always has so much to live up to in people’s expectations as the original film is loved by so many for so many reasons. There are of course the songs, the song and dance routines, but also the movie stars - Gene Kelly, Debbie Reynolds, Donald O’ Conner and Jean Hagen in the main title roles, and of course Cyd Charisse in the now iconic ballet sequence.

Initially, Singin’ in the Rain had very muted response on its film release in 1952 as it was, like so many other musicals of the era, little more than a contemporary “Juke-box” musical with the songs, including “Singin’ In The Rain”, having already appeared in other films. This time around, this Arthur Freed song seemed to be perfect for the title of a film, and with the combined cast, plus of course film direction by Stanley Donen, who also did the co-choreography with Gene Kelly, a “slow burner” eventually became one of the most loved and respected film musicals of all time.

Recreating the screen magic of the film on stage at the same time as putting your own identity into the lead roles is always going to be a problem for any performer, but here Sam Lips (Don Lockwood), Charlotte Gooch (Kathy Selden), Ross McLaren (Cosmo Brown) and Faye Tozer (Lina Lamont) manage to do just that.

The original movie was wisely set in the 1920s (1927 when talkies were just coming into films to be exact) to match the time period that most of the songs came from, and set and costume designer Simon Higlett has done a very good job with the detailing of both in this show and created a believable background for our cast to perform these now classic songs and dance routines in. The whole of the main set is in fact built for two classic moments, a very innovating use of stage design for “Singin’ In The Rain” in Act I and the wonderful ballet segment in Act II.

There is always something deceptive about these classic Hollywood song and dance routines and that is that, performed properly, they always look so effortless, and in truth some of these songs have difficult arrangements for any vocalist to sing, and the dance routines, including of course “dance tap” are difficult enough in their own right, but getting them to look easy, that is very hard to do. In this show, our main singing/dancing trio, Sam Lips, Charlotte Gooch and Ross McLaren achieve just all of these things with apparent effortless ease. Getting the lightness of touch required to play the often light comedy roles of these characters is also very difficult to get just right and standing out here in that role is Ross McLaren as Cosmo who knows the importance of “Make ‘Em Laugh”.

The other main comedy role in this story is silent screen superstar Lina Lamont who is having a career crisis with her voice, lack of singing ability, and the introduction of sound to films. The situation was not uncommon in this transition period of the late 1920s and many film stars from many studios were for one reason or another unable to make the move from silent films to talking films and their careers ended very abruptly as a result. With her take on Lina Lamont, Faye Tozer is obviously having a lot of fun with this role, and gives us a performance with a lot of subtle humour in it.

This stage production is full of so many nice little touches of detailing, including above the main stage the use of the original “Hollywoodland” signage. In the end though what really matters is that  Singin’ In The Rain is a stage show with a talented cast and obviously made with a lot of care and respect to both the original film, its songs, its dance routines, and of course the original film stars, choreographers and everyone who created this now classic Hollywood musical film all those years ago.