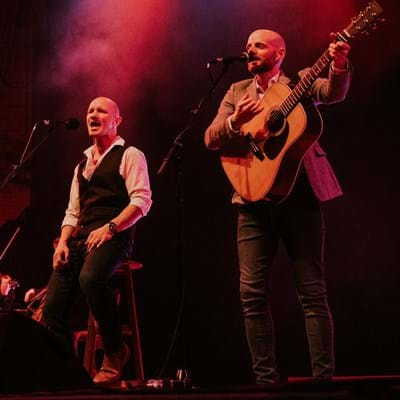 Simon & Garfunkel Through the Years made a very welcome return to the Festival Theatre, Edinburgh last night (30th May), after their earlier dates had to be postponed due to lockdown.

Pete Richards and Dan Haynes were accompanied by Leos Strings together with backing musicians  Jonny Knight (guitar and keyboards), Steven Holmes (bass guitar) and Calvin Hansen (drums).  When I first saw Pete and Dan performing several years ago, it was simply two men and one guitar performing the songs of Simon & Garfunkel with perfect harmonies.  Adding in so many other musicians could have taken away from the beauty and simplicity of their performance but, on the contrary, it enhanced it, with the strings adding a richness to the sound, and additional guitars and drums giving almost a rock sound to songs like “Mrs Robinson” and “Baby Driver”.  The additional instrumentation will perhaps take some people closer to the arrangements that many Simon & Garfunkel are familiar with on their studio recordings, and some of their later live concerts.

All the favourite hits were played tonight, along with a few possibly lesser known songs such as “At the Zoo” and “Punky’s Dilemma”, but the highlight for me, as always, was Pete’s outstanding performance of “Bridge Over Troubled Water” with Pete’s vocals perhaps, in my view, even better than the original version, with backing from Jonny on keyboards, and Leos Strings.  Judging by the applause, the audience loved it too.

As always, the words of Sound of Silence are a warning to what happens if we remain silent to what we see and hear and they have a very poignant meaning at the moment with events that are unfolding in Ukraine.

The final song of the evening, the third one in the encore, was “Keep the Customer Satisfied”, and it was obvious from the cheers and standing ovation at the end that Simon & Garfunkel Through the Years did exactly that.  There is a reason that Pete and Dan (aka Bookends) are now considered by many people to be one of the finest tribute bands in the world, and that was obvious all through this show. Perhaps the reason they are so good is simply that they love these songs, and always perform them from their hearts.

Pete Richard and Dan Hayes will be returning to Edinburgh to theSpace@Symposium from 5th to 27th August for the Edinburgh Festival Fringe, with a show taking them back to their beginnings of two voices and one guitar.  Tickets for this show always sell out quickly, so try to get one if you can.