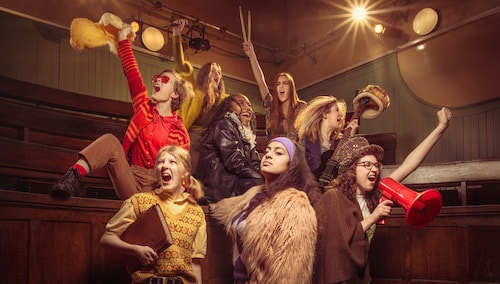 Please note that unless requested by performers/pr/venues that this website no longer uses  the "star rating" system on reviews.
Seven Against Edinburgh is at The Lyceum (Studio) for a short run from 19 to 23 April and it has been developed with the Lyceum’s “Young Creative” project which gives, as you would guess from the title, creative young people the opportunity to work alongside people who are  already established in the industry and theatre. For this production, those young creatives are

To bring their creative vision to life on stage, the Lyceum put out a casting call for young people resulting in the cast on stage for this production.

The main story and events behind this show I have had an interest in for many years, and this is the story of initially one woman, Sophia Jex-Blake, attempting to become the first woman to enter the University of Edinburgh to study medicine. Her initial attempt failed, but Sophie did not give up and soon a few other brave women joined her cause to also study medicine at the University.  This group had a few membership changes over the main four year period of its history but became known as The Edinburgh Seven and eventually consisted of Sophia Jex-Blake, Isabel Thorne, Edith Pechey, Matilda Chaplin, Helen Evans, Mary Anderson, Emily Bovell.

The group was also called "Septem contra Edinam" in reference to the Seven against Thebes of Greek mythology. Thanks to Wikipedia for this information.

What makes this story more remarkable was that when “The Seven” finally won their fight to enter the University in 1869, they were not only the first matriculated students of the University of Edinburgh, but of any British University.

This important landmark in the history of education for women is told in an interesting fashion as a present day rock/punk band, The Patriarchy Slayers, discover the story of our trailblazing women whilst desperately trying to write seven new songs for their next stage booking.

The story of The Edinburgh Seven is well detailed online, and I leave readers of this review to find out more about this story there, as it is really how this story is developed on-stage that interests me.  For the most part, this format of continually shifting between present and past works, and to be fair to this production, it does present the facts and what happened to the seven women very well in the time allowed, and we also find out a little about what happened to them after their studies in Edinburgh. Although they won their right to study medicine, none of them was allowed to graduate and it was not until 2019 that the University, 150 years since their original matriculation in 1869, awarded “The Edinburgh Seven” their posthumous degrees.

What makes this production a little more interesting than just a history lesson is the band idea.  Yes, this brings in obvious similarities in format to the hugely successful rock-musical “Six”, but it works and gives some of our cast the opportunity to play live for most of the songs in this show (why not all, I don’t know).  The music and songs are pretty basic, but they work well here.

There are some interesting stories weaving their way through our band and it would be interesting to see where they could go if this story was ever expanded outside of the 90 minute format it is currently in. It seems almost obligatory to have the “exploring their own sexuality” story these days, and we have it here too, but there are a few more original ones too. The idea of accepting and dealing with illness at a young age added some depth to this work.  Also, trying to cope with the loss of a parent so young, and still “talking” to that parent on a mobile phone interests me in many ways; can technology bridge, even for a short while, that space between life and death and help in the grieving process?

This is ultimately a work/production of young people, and yes, it might need tightened up and polished in some areas, but the fact that it is here and being presented on stage is far more important for everyone involved.  Will some of our performers become actors? Who knows, but already some just look far more at home, far more relaxed, under the spotlight than others.

The Edinburgh Seven won their battle (for the most part), but education for women is still not universally available in many parts of the world, and it is only this year that the ruling Taliban in Afghanistan did a U-turn on their promised policy and closed the doors to education for women in that country.