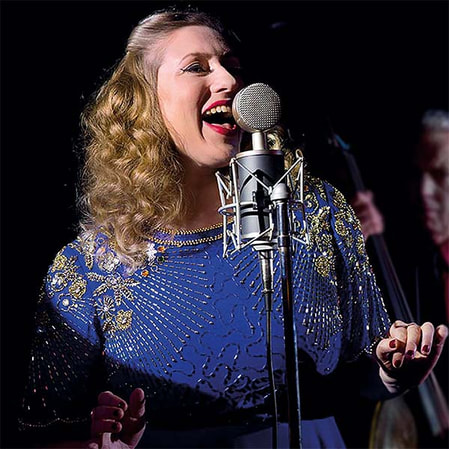 Jazz Gala: Seonaid Aitken Big Band plus special guests present: A Night With Ella at The Assembly Hall might seem like a big title for a show, but this one, on the opening night of The Edinburgh Jazz and Blues Festival 2022, was a big show.

This was Seonaid Aitken (vocalist, violinist, broadcaster) in her own version of “musical heaven” with a big band, songs of her (and many other people’s) “go to reference point in music” – Ella Fitzgerald.  I have to admit that this show was on my “have to go to list” at the EJBF this year as I had previously reviewed Seonaid with her “A Night With Ella” at The Festival Theatre Edinburgh in 2017 as part of the celebration events for the Ella Fitzgerald centenary year, so I knew that this show was going to be a match of a magical voice with magical songs.

The recorded musical legacy that Ella Fitzgerald left to this world is a large one, so any show is always going to be just skimming across the surface of one of the most important figures in the history of Jazz and popular music but, even then, there were so many classic songs to be heard tonight. During her long career, Ella worked with many of the great names in music as well as some of the greatest musical arrangers of the day including Nelson Riddle and Quincy Jones. Of course there are also wonderful songs by some of the greatest songwriters of the 20th century – George and Ira Gershwin, Cole Porter, and Richard Rogers and Lorenz Hart, to name only a few of them.  Here are immortal songs from The Great American Songbook such as My Funny Valentine, That Old Black Magic and Every Time We Say Goodbye.  As always, Seonaid’s diction, timing and sense of swing are not only perfectly suited to these songs, but somehow make you feel that you are stepping back in time to the golden era of big band songs, either live in a dance hall or just listening to them on the radio.

Seonaid had a few musical guests with her this evening, Glaswegian rising star singer kitti, saxophonist Konrad Wiszniewski and Italian trumpeter Daniele Raimondi.  The evening produced some fine individual and collaborative performances from all, with the difference in the vocal ranges and performance styles of kitti and Seonaid always producing something unexpected and interesting to listen to. One of the highlights of the evening for many people in the audience was Seonaid, kitti, Konrad, Daniele and the band’s performance of It Don't Mean a Thing (If It Ain't Got That Swing).  Also another highlight was the contrasting vocals of Seonaid and kitti’s duet of “Misty”.  This evening was obviously a musical love affair for kitti too, and her performance with Daniele Raimondi on trumpet of Summertime received much deserved applause.

Seonaid Aitken is a great interpreter of these songs, and always manages to make performing them look and sound so effortless, and that is an art in itself as these songs have many unexpected surprises for any vocalist, and you need to be very good to make them sound like this.  This of course also applies to any band attempting to perform them, and Seonaid had an impressive line up of musical talent in her big band this evening. Everyone in the band was here for one reason, they are very good at what they play, but special mention for this evening needs to go to Tom Gordon (drums), Andy Sharkey (bass) and Tom Gibbs (Piano).