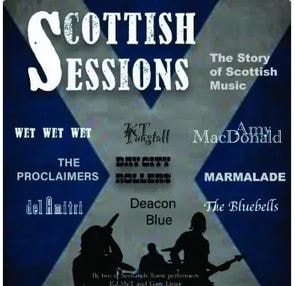 Elsa Jean McTaggart Scottish Sessions: The Story of Scottish Pop Music at theSpace@Surgeons’ Hall is a new show from the ever-popular Elsa McTaggart and Gary Lister and, judging from the response from tonight’s audience, is definitely a crowd-pleaser.

This was very much an audience participation, sing-along show, and the audience were on board from the very start, shouting out their guesses (at times, hilariously wrong) to what each artist/song was going to be from Elsa and Gary’s clues, joining in with the singing, and cheering and applauding loudly at the end of each number.

The show ran in chronological order, starting from the 1960s and running right up to date, with a selection of hit songs from Scottish writers and/or performers, including Marmalade, Bay City Rollers, Wet Wet Wet, and Deacon Blue.   Although the majority of the songs were pop songs, Elsa did get the opportunity to return to her traditional fiddle-playing roots on a beautiful rendition of Runrig’s version of “Loch Lomond”.

This was a fun, sold-out show, which I suspect for many people tonight was the start of their Saturday night out, and it certainly left them all smiling and happy after 50 minutes of nostalgia.   If I had any complaints about the show, it was that only 50 minutes meant that many of the great Scottish performers had to be missed out, and I would love to see this expanded into a full-length show at some point.