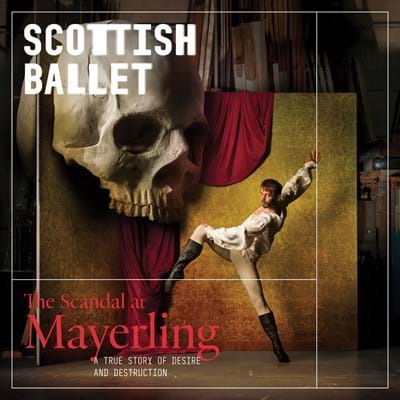 Scottish Ballet’s The Scandal at Mayerling is at the Festival Theatre Edinburgh this week (Wed 25 to Sat 28 May), the last stopping place on the current tour (Glasgow, Inverness and Aberdeen having been performed already). Mayerling is visually impressive from the moment the curtain rises and obviously an expensive production to take on tour, but it is oddly a work that I have some mixed feelings about.

From the very outset, Mayerling is by default different from so many other ballets out there, not only at the moment, but since its choreographic creation by Kenneth MacMillan for the Royal Ballet and its first performance at The Royal Opera House in 1978.  Mayerling is also a story based firmly on known facts, but always hinting at other possibilities to those facts. In truth, no one really knows the truth of what happened in the final moments that led to the heir to the Austrian throne and the then mighty Habsburg Empire - Crown Prince Rudolf - and his young 17 year old mistress, Baroness Mary Vetsera both being found on 30 January 1889 at his hunting lodge “Mayerling”.

By its very nature, to tell this story properly, a large cast, plus a large set and costume budget have always been required to recreate the grandeur of the Imperial Court and in this new production, developed in association with Lady Deborah MacMillan, this new adaptation by Christopher Hampson and Gary Ellis has achieved all of these goals whilst also quickly focusing on what gives Mayerling so much of its darkness, the always fragile, but now completely unravelling mental condition of Crown Prince Rudolf. There is no sugar-coated beginning, middle or end to this story, but somehow that darker side of the human psyche is often the one to explore for any real depth of emotions, even if that at some times makes slightly uncomfortable viewing for audiences. There are also many stereotypes broken here and although many of us might at times have dreamt of what being born into immense wealth, power and privilege might be like, Crown Prince Rudolf’s story clearly tells us that having all these things does not mean that you also have a happy life.  In his case, clearly the exact opposite had happened.

Creating the visual world for Scottish Ballet’s dancers to perform in, set and costume designer Elin Steele has created some of that luxury and opulence of one of the great European Royal Courts of the day. Equal costume and design care is also taken when away from the court itself to give us a real impression of not only the high and low levels of society that Rupert lived his life in, but also hints of the political tensions of the time and the internal power struggles going on within the Royal family itself. The careful use of lighting design by Paul Pyant also adds much to the atmosphere of this story when required.

The task of bringing the now mentally very fragile and increasingly death obsessed Crown Prince Rudolf to life this evening was down to Evan Loudon and this was for me a performance of at times very different levels of success. For some reason that I do not know, Evan seemed a little uneasy in the beginning, even for moments hesitant, in this role tonight and it seemed to take a little time for him to fully settle into who his “Prince Rudolf” really was, but when he did, the results were worth the wait and the duet with his new wife, Princess Stephanie (Constance Devernay) was simply at times a disturbing mixture of passion and power. Here you could almost feel the fear that Stephanie felt not only as she watched the many demons within Rudolf come to the surface, but the inability of either of them to control them. That feeling of being powerless in the face of Rudolf’s changing moods is captured so well by Constance Devernay as insightful choreography lets her be thrown around almost like a rag doll at times.

For me, Sophie Martin is always a joy to watch in any role that she performs, and here, playing the part of the doomed young lover Mary Vetsera, was no exception. There is always with Sophie Martin that indefinable something extra that makes you want to watch her wherever she goes on stage, and in the second half of this story, Evan Loudon was obviously very comfortable as Rudolf and the two simply brought out the best of each other performance-wise on stage.  This is where the sheer physical power alone that Evan needed for many of these lifts contrasted perfectly with Sophie’s always effortless grace and apparent weightlessness when moving. That sheer physicality needed for the role of Rudolf was also important as Evan was by now also giving us a portrayal of a man who was crumbling from the inside out.

Sometimes events happen in the larger world over which a production has no control whatsoever, and sadly today was one of those days for me and somehow, waking up to the news of an gun massacre at an elementary school in America, I could just not get comfortable with the scenes with guns in them on-stage tonight.  For me, watching a by now very mentally unstable Rudolf brandishing and firing a gun (even a prop one) kept me thinking of the news events of today as they were updated and I could imagine the fear that everyone in that school must have felt. Perhaps, just for one night, in light of unfolding events elsewhere, a little editing to the story might have been a wise move?