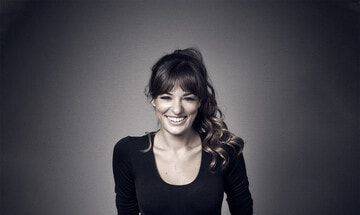 The Scottish Chamber Orchestra and Nicola Benedetti together at The Usher Hall was always going to be one of my personal highlights for this year’s Edinburgh International Festival.  Anyone who reads my reviews on a regular basis will know that I always try to get to as many SCO performances as possible throughout the year, as their programme is diverse and often challenging what many people expect to hear a chamber orchestra performing.  Nicola Benedetti is of course, always a pleasure to watch performing anything that she wants to do.  Add into this music by one of my favourite composers, Tchaikovsky, and this was pretty much a perfect musical evening for me.

Music this evening was in two very different, but also very compatible, musical halves. Opening the performance for the evening was Nicola Benedetti and Bruch Violin Concerto No 1 in G Minor. This is a work that, despite its seemingly endless popularity with violinists and its beautiful and at times almost ethereal music, is considered by many people one of the most technically challenging works ever written for a violin (and also graded as such).  Here both violin and violinist are tested to the limits of what either should be able to do, and for any performer even this is not the full story as this work also requires a very special “touch” that few can master properly.  Nicola Benedetti is one of those few people who have both the technical skills and that elusive expressive touch, and in her hands everything just looks and sounds so natural to perform and her pleasure at doing this is obvious throughout this performance.

Listening to this work, you get the impression that it was composed in one burst of inspired creativity, but the opposite is in fact true as surviving records tell us that not only was Bruch struggling at times with this work, but that the first performance of it was less than well received and the whole work was re-written and refined many times until we had the almost magical work performed on stage this evening.

The second half of this evening was a selection of work from The Sleeping Beauty by Tchaikovsky that was skilfully brought into life by SCO and conductor Maxim Emelyanychev, who as always brings out the best from any music that he seems to touch and makes it a uniquely expressive personal interpretation. Even with this selection, there are so many magical musical moments to choose from here, but always for me, the harp cadenza, performed this evening by Eleanor Hudson, is a personal favourite.

At first, the connection between both works might not be obvious as they are both very different in their technical aspects, and The Sleeping Beauty was of course written for a ballet, so a straight comparison is not really possible.  What both (well at least for me) have in common is that air of musical fantasy around them; Bruch created a musical fairy tale for violin and, of course, The Sleeping Beauty is based upon one. Both works have the ability to transport the listener to realms of fantasy and wonder, and tonight the SCO did their task in being the ones who took us on that journey with them in music.