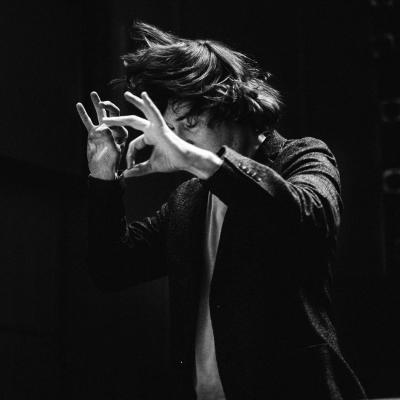 Scottish Chamber Orchestra were at The Queen’s Hall Edinburgh tonight with their performance of Maxim’s Mozart, a carefully selected programme of three works under the direction of Principal Conductor Maxim Emelyanychev.  Although a very different programme, this performance follows on from the highly successful appearance at the Royal Albert Hall last summer which saw SCO/Maxim perform in a BBC Prom that explored Mozart’s final three symphonies.

The featured works in this performance (below) are separated by only 12 years, but nonetheless, the differences between the first work, a probable commission when Mozart was only 19 years old, and the later ones show very different aspects of Mozart as a composer and a person.

The first work (and a fairly short one) was obviously written for the night-time; but whose night-time?  That it seems is an answer we will never know as there are no existing records of that detail.  Whoever/whatever the original circumstances of this work’s creation, the SCO performed tonight a work of many moods and more than a little air of mystery.

For many people, Piano Concerto No 20 in D minor was always going to be a highlight of this concert, and Maxim Emelyanychev’s performance on piano (as well as conducting) captivated this audience from start to finish and received well deserved multiple ovations.  Any work in a minor key is obviously going to deliberately evoke darker and more sombre emotional responses to it, but somehow, Mozart also managed to make this work a very delicate and moving composition which Maxim captured in all of its emotions and colours.

The final work for this evening (Symphony No 39 in E-flat Major) is considered by some people to be the opening work of a larger musical landscape alongside Symphonies 40 and 41, and as either a solo work or perhaps part of a larger one, it ultimately makes no difference to the beauty and musical genius of Symphony 39, both captured so well by Maxim Emelyanychev and the SCO this evening.

Writing a review of any performance like this is always a little bit difficult (for me anyhow) as music, and particularly the music of Mozart, is so much an emotional experience of the moment, of the performance, and sometimes words just don’t capture all of these things that well, but somehow I always see in my head Mozart’s music a little like warm summer rain gently falling from the sky; sometimes it hits the ground and makes a wonderful sound whilst other times the warm rain just seems to suspend itself in mid-air and time in that perfect moment. These three works are not only a reminder of the genius of Mozart, but also how much he left to this world and future generation when he died at the far too young age of 35 years old.

Nothing to do with this performance, but every time I write a review about a Mozart performance I always try to reclaim a little of the lost place in musical history of his older sister (born 1751) Maria Anna Walburga Ignatia Mozart with whom he played music many times on stage until the conventions of the time deemed it inappropriate for Maria to continue doing this.