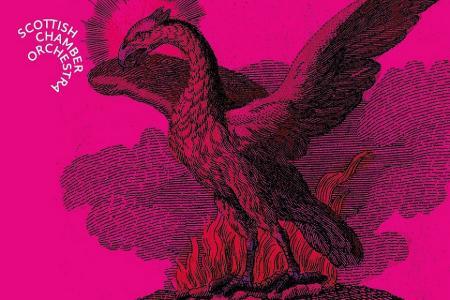 SCO Maxim’s Firebird at the Usher Hall Edinburgh tonight was, for me, why I always enjoy any performance of The Scottish Chamber Orchestra so much. Despite having a very busy touring schedule that covers a very wide range of music, SCO somehow always manage to surprise me with the music that they programme into any concerts, and I always find new music to explore with them.  Tonight, the full programme had more than a few surprises for me, but the highlight of the evening for so many people in the audience was obviously “The Firebird Suite”.

The first work this evening, BEETHOVEN Leonore Overture No 3 interests me for many reasons. Not only is this short overture an incredible piece of work, but it is also gives me some odd pleasure to know that even a musical genius of Beethoven’s level could be indecisive and less than happy at times with his own work whilst at the same time knowing firmly what he wanted to do and not to do again musically. It is somehow a comfort to know that Beethoven could be at times just as unsure of the road ahead of him as we all can be at times.

This overture (one of 4 known variants) is from Beethoven’s only opera. The title “Leonore” in the end was never used for the opera as it was changed on advice from others to Fidelio to avoid confusion with other works out there by the same name.  This version, No 3, was considered by many (including Wagner) simply too good, and the main problem was that Beethoven somehow condensed all of the main themes, the general story line of the opera into the small time-frame of this overture. Here in this short time period of some 16 minutes we have everything that Beethoven is famous for in music – raw power and fragile beauty (and every emotion in between). Despite all of this, Beethoven found working on an opera to be far from his liking and vowed never to write another one in his life-time.

The fact that PROKOFIEV Violin Concerto No 1 in D Major was ever written at all is a mystery to many people, but written it was in a highly creative period at this time by Prokofiev that seems in sharp contrast to the political chaos that was going on all around him (the fall from power of the Russian Royal family, The October Revolution, Lenin’s return to power to name but a few of them).

Somehow, despite the dangerous times that Prokofiev was living in, this intriguing and at times beautiful work over three very distinctive movements was composed. In order to escape the chaos of his homeland, Prokofiev was to be moving from country to country over the coming years and his original plans for the first performance of this work not only changed venue, but intended violinist. Despite all of this, this work has been recognised as a major work and has come to be loved by many soloists over the years.

Tonight it was the internationally acknowledged soloist violin talents of Alina Ibragimova who brought this music and its story to life on stage and it is easy to hear when someone like Alina Ibragimova performs this work why it has become so loved by so many.  This work is constantly shifting both in dynamics but also in how the soloist moves from centre stage to becoming part of the main orchestra at different times along the winding musical paths that Prokofiev envisaged. Fragile, almost ethereal in parts, dynamic and powerful in others, what we have here is a kaleidoscopic work of musical colour and emotions.

The main performance work this evening was of course STRAVINSKY The Firebird Suite [1945]. The fact that we even have this wonderful work from Stravinsky to enjoy is itself one of the great “what if” stories in 20th century music as the composer was far from the first choice of Sergei Diaghilev when he was looking for a composer for his new ballet “Firebird” for his “Ballet Russes”. In fact, Stravinsky was 5th choice.  It, however, became instantly obvious to many that for this ballet, which was a merging of two unconnected Russian folk tales “The Firebird” and  “Koschei the Deathless”, that Stravinsky had created for this tale of magical creatures and vengeful immortals “the only” music for this ballet.  It is no wonder that Stravinsky’s inspired telling of this story in all of its beautiful tones, textures, colours and emotions was to set him on his path to international recognition.

Tonight conductor Maxim Emelyanychev brought out all of the wonder of this work from the SCO and in return was rewarded with perhaps the longest standing ovation that I have to date seen the audience give to any SCO performance.