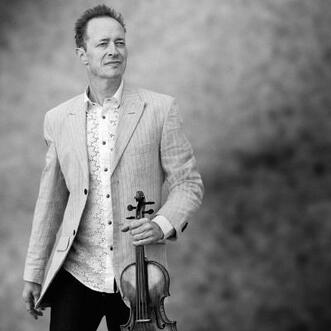 The Scottish Chamber Orchestra with Anthony Marwood and “From Darkness Into Light” at The Queen’s Hall tonight was for me one of the reasons why I like this orchestra so much – the unexpected.

Anthony Marwood has an international reputation as a violinist and this evening’s selection of music highlights the diversity of the violin as a musical instrument by work from seven very different composers – Ives, Raskatov, Haydn, Bruckner, Elgar, Stravinsky and Weill, and spanning three centuries – (18th, 19th and 20th).

The music itself takes us all on a journey through time, space, colour, emotions, styles and creativity, and quickly works that at first seem to be unconnected with one another start to weave together their different musical strands and thoughts and by the end of this evening’s programme, they have somehow connected and created their own new musical identity.

Music has never through the centuries been a straight line (although a linear development can clearly be seen if you stand far enough back to view it), instead it is like a giant tapestry where the threads are never completely woven into the larger work.  Someone at some time will always come along and be influenced by what has gone before or what they have heard elsewhere and take threads to make their own new music with and complete another part of that never ending musical landscape. You can, for example, clearly hear in the last piece how Kurt Weill was influenced by the sounds of old Latin Mass and contemporary composers’ work, and for a while it seems in this work that he is continuing in their footsteps. Something then starts to change, something different starts to be heard and Weill is giving us a taste of what was to come in his later work for theatre.

Sometimes in music though, there comes along someone who hears new ways to interpret the rule-book, someone who has the vision to re-arrange the building blocks of music in a configuration that no one has really used before and our opening work comes from one such man – American composer Charles Ives. With this work, “The Unanswered Question”, Ives is not only asking the biggest questions of all – the very creation of the cosmos around us and the creation of mankind, but doing it in music, in sounds that are painting a picture of emerging from “darkness into light” as clearly as any painter would do on a canvas. As is often the case with visionaries in any field, their work can often attract little attention at the time (or even be ignored), as it can take the rest of the world time to catch up with their ideas.  I am never sure if this is a deliberate rejection by people in general or simply that at the time they were just looking in different directions. I know for myself that I have over the last few years completely reconsidered my views of some musicians and their work from the 1970s, 1980s and 1990s (and beyond).

In between these two very different bookends of musical ideas, there is some very different, but strangely very connected music. At one end of this scale we have the compositional genius of Haydn and his never ending musical turns, twists and little musical jokes that always sound like they were written for a far gentler pace of life for everyone, to Stravinsky creating new and bold themes for his times. Music from Raskatov and Bruckner also add their individuality to the evening’s programme whilst Elgar proves again his ability to create beauty and wonder in a short span of time.