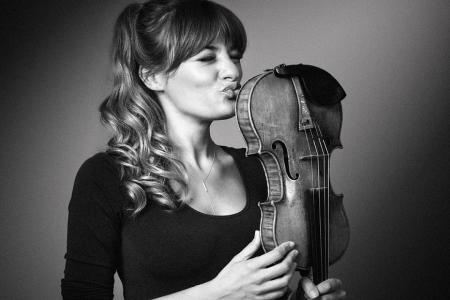 SCO Benedetti & Emelyanychev at the Usher Hall Edinburgh tonight was the first concert in the Scottish Chamber Orchestra’s 2022-2023 season and, as the title suggests, Scottish superstar violinist Nicola Benedetti and Principal Conductor Maxim Emelyanychev were at the forefront of this diverse and interesting programme.

Opening this evening’s music was The Chairman Dances, a 1985 composition subtitled Foxtrot for Orchestra by John Adams . This work was originally a special commission from the Milwaukee Symphony Orchestra in 1985. Here “dances” in the title is a verb and not a noun, and over the 13 minutes or so of its performance time, we are taken into an at times almost minimalist fantasy world of dance-like tunes which the composer was to describe as an “Out-take” from his Nixon In China opera that he was working on at the same time.

Perhaps the minimalist reference to this work is a little bit unfair as, although Adams was at one time often classified in the same musical group as two of my favourite 20th century composers, minimalist masters Steve Reich and Philip Glass, this work has so many themes of musical subtlety developing throughout it that is in many places far from “minimal”.  At times this work seems to blend traditional dance and Hollywood musical moments together and it is easy to see why Adams could envisage Mao and his wife Chiang Ch’ing (Madame Mao), who was a former Shanghai movie actress, dancing and remembering their youth together.

For many people in the audience tonight, the highlight was probably the next work, the World Premiere in this concert series of James MacMillan Violin Concerto No 2.  Technically the “premiere” was at the SCO performance in Perth Concert Hall last night (28th September), but the next evening will do fine for me. In this work, there is always something unexpected and unanticipated as this is a classic example of when to say something and when to use brief moments of silence, as musical techniques and themes carefully develop and, when needed, repeat. Here great compositional skill takes us as an audience into an at times almost playful space where soloist and orchestra constantly exchange ideas and themes between one another.

For any work like this, any composer no matter how gifted needs to have a very special soloist who not only has the technical skills required to perform the piece, but also one who can breathe real life into its performance on stage, and Nicola Benedetti is clearly such a special talent. As always, watching Nicola Benedetti perform is like watching someone becoming almost part of the music, someone with an innate ability to share the emotions, the story and the colours of anything that she performs with her audience, a very special gift to be able to hold people in a “musical moment” in time.
James MacMillan dedicated this violin concerto to Nicola Benedetti and also in memoriam Krzysztof Penderecki, the great Polish composer who died in 2020.

The second half of this evening’s programme gave us the last symphony from Pytor Ilyich Tchaikovsky, his now immortal Symphony No. 6 in B minor. Also known as Pathétique Symphony, this work at first glance can be all too easily confused with the English word “pathetic” and its meaning, but here we have a simple case of a word not completely translating, as the original use of the word translates more as passionate or emotional, even melancholy. In fact, Tchaikovsky himself also called this "The Passionate Symphony", one which he had truly put his very heart and soul into and it is perhaps here that we truly finally got a glimpse into both.

Over the years there have been so many rumours about this work, even conspiracy theories abound, but are any of them true, can we ever give any of them truly substantive factual origins? Was this work really the great composer coming to terms with not only his own life, his own emotions and at times periods of personal depression, but also his own sexuality? In the end we will never know and perhaps none of this matters as what Tchaikovsky gave to the world here was a work of true emotional beauty. The fact that he was all too soon to die of cholera (28 October 1893) after this work was completed, from drinking unboiled water whilst the disease was circulating in St Petersburg adds even more poignancy to this work.

There are three very separate works here from three different centuries performed in this programme, and this is why I like the SCO so much as their willingness to perform such a wide range of music over any season and often challenge the boundaries of what we define as classical music is never ending. The works performed tonight also clearly show that what we define as classical music is not a fixed point in time, but in truth a constantly evolving musical form with new, exciting and innovative works being constantly added by contemporary composers.