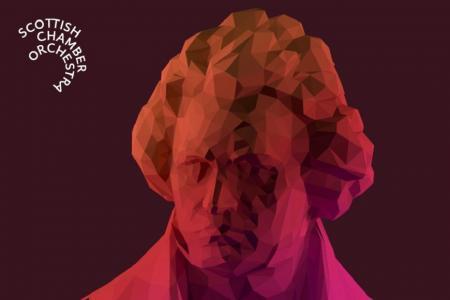 The opening work, MOZART Symphony No 32 is an oddity as it is a short work, more of an opening and a closing for something else, perhaps another work by Mozart or written for someone else to use. The work is clearly not intended as a symphony, despite its name. What the work is, however, brings much to the evening’s music as its lightness and its freshness (despite not being composed at a good time in Mozart’s life) ties in well with Beethoven’s Sixth later in the programme.  This may be a short work, but there is so much in it and the SCO were obviously having a lot of fun playing this one.

CHOPIN Piano Concerto No 2 is quite rightly consider by many people one of the greatest works ever written for this instrument, and when you consider that this was written by a young Chopin, barely then out of his teenage years, then this work clearly stamps his creative authority on piano for the years ahead.  This is actually his first piano concerto, it was however published as No 2.  Breathing life and soul into this work this evening was internationally recognised pianist Benjamin Grosvenor who clearly loves this work in all of its technical difficulties and wonderful expression of just what this instrument is capable of over the three movements of this concerto.

While doing a little background research for this review I found out that Chopin wrote the second movement while he had a distant idolization of Konstancja G?adkowska (a Polish soprano), and for me this is fascinating as that distant love affair has, when I heard this work, somehow survived in this music for nearly 200 years. Whilst listening to Benjamin Grosvenor’s performance of this, I kept seeing some great movie love scene, in black and white for some reason being projected on-screen with this as the soundtrack.

Piano Concerto No 2 may be a wonderful work for piano, but it is obvious, particularly when placed in between works by Mozart and Beethoven, that full orchestral composition was not where Chopin’s main talents lay and that the piano was always going to be his instrument of musical communication to the world.

Finally, our programme title work, BEETHOVEN Symphony No 6 ‘Pastoral’; a work important for so many different reasons. Firstly, a very different approach by the composer it not only giving a name to this symphony, but also writing such detailed notes for all of its movements, a named work with very specific parts to make up an overall story. If this work could have been recorded at the time, it would perhaps have been the first of what would become known many years later as a“concept albums”.

Symphony No 6 ‘Pastoral’ is just what the name tells us it is going to be, a work that reflects landscape and nature. Although Beethoven was not the first composer to do this and recreate some of nature’s sounds in his music, this work is different because Beethoven loved walking amongst nature, loved being away from the hustle and bustle of the city and obviously found great comfort in the nature that was around him, while at the same time respecting the people who lived in the countryside, country-folk traditions, and also simply enjoying the sheer beauty of the landscape and the skies above as storm clouds would at times gather and slowly give way again to brightness of a new clear day.  All of these elements are reflected in this wonderful work and it is hard now listening to believe that this masterpiece of such lightness and energy was composed at a very low point in Beethoven’s personal life.  Perhaps it was nature that somehow gave him new meaning in his life and “saved” him from following other darker thoughts. “Pastoral” is not just a composition of music, it is a little view into the very thoughts, the very soul of one of the great composers, and that is a very rare thing.  There are moments in this music where you can imagine, just for a moment, stepping backwards in time and walking this landscape with Beethoven at your side as your tour guide, or even perhaps companion walker.

Conducting this programme of works this evening was the internationally acclaimed Joana Carneiro, and it was clearly obvious that Beethoven’s Sixth in particular was a work that clearly had a very special place in her musical affections.

Having Mozart and Beethoven on the same performance programme is always interesting to me as it is documented that a young sixteen year old Beethoven travelled to Vienna in 1787 to hear one of Mozart’s performances and also met the composer.  What personal meaning this meeting was to have on Beethoven we can only guess at, but musically, we can see far more clearly at times.

As usual from Scottish Chamber Orchestra, an interesting programme of work, performed as always to a high standard and clearly showing how diverse the range of the SCO performances over any season of works can be.