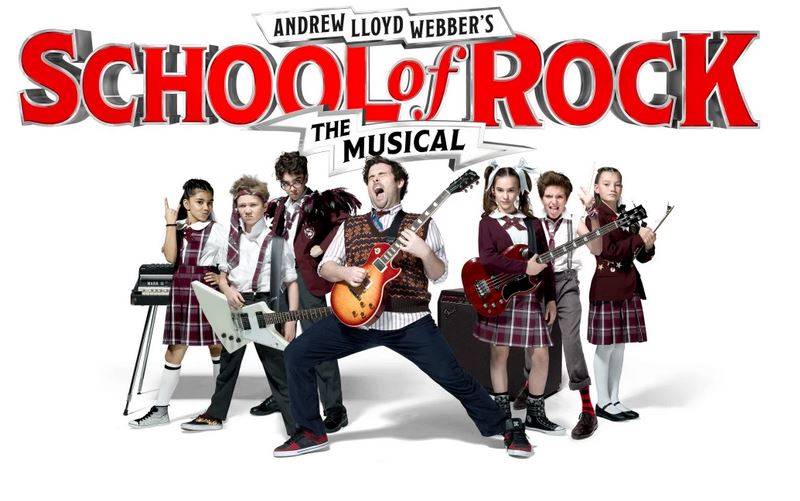 School of Rock the Musical is at The Playhouse Theatre Edinburgh this week (Tue 25 Jan - Sat 29 Jan) and Andrew Lloyd Webber’s stage adaptation of the very popular 2003 film was as usual for one of his shows, filling the theatre tonight.

I have to admit early in this review that I have never seen the original film completely (only snippets from it)  or the 2016–2018 television series (this stage show was originally on stage by then), so I only have this stage production to judge School of Rock by and my initial feelings on it are very mixed ones.

The first thing about this stage show that any fan of the film needs to know is that Andrew Lloyd Webber has written new music for this show, and although the original movie songs are still here, gone are some of the classic rock songs that will have made up the musical background to this movie for many people.  There still of course are many spoken references here and musical snippets. We also now have an apparently younger class age group than the original fifth formers.

Transitioning a film to a stage show is always going to be a compromise, and here, Julian Fellowes (book), Laurence Conner (Director) and Glenn Slater (lyrics) have with Andrew Lloyd Webber done a good job within the limitations of an existing story and format (and a licensed one at that), but the move has not been a seamless one.

If there is a secret or magical formula to writing a stage musical, then Andrew Lloyd Webber is one of the few people alive who know that formula, but this time, for me, it is not working as well as it should do, and somehow so much of that wonderful flowing music and story line that I have come to expect from his many hit shows is far too often not here on stage.  There are far too many moments here when the story and songs seem a little forced into scenes that interrupt the flow of the narrative. There are still times here though where that magic that I was looking for is there, and Rosalie’s (Rebecca Lock) “Where Did The Rock Go” is a musical stage song that you can remember on leaving a show.

As our failed rock-star/fake teacher, Jake Sharp is a very good Dewey Finn, but he is always fighting that stage curse of working with children, and that is at some point, at least one of them is going to steal the scene, and they do, all too often here.  All of our cast of Dewey’s class perform well here and it is always important that there are shows around like this that give young performers the chance to perform on stage, particularly in a show of this size and budget.  For me though, there are a few too many class shouting moments and I don’t know why, but I could just not get Another Brick In The Wall by Pink Floyd out of my head when that happened. There are also too many instances of this show all too many times relying on stereotypes and over-used clichés as it attempts to tick every PC box it can along the way.

Another issue for me with this show is that I am not sure where the target audience is for it, or why now in 2022 the class that Dewey takes would be familiar with or have any real references to the many names that are associated with now classic rock groups and performers of many decades ago. That was a potential problem with the original film, and now nearly 20 years on, it is an obvious one.  If this show was having a major re-write then perhaps focusing on bands that a far younger age group would associate with would have been an opportunity to bring the show into a far more relevant time frame.

Despite some of my negatives, there are still many positives to this show and the message that parents must pay attention to their children, listen to their needs now and their hopes and dreams for their future is an important one, and actually far more important than the musical story here.  Sadly the format of the show and the time restrictions placed upon it to tell the main narrative do not allow us to explore these areas or the emotions and personal dynamics of the individual children and their parents.

On a far brighter note, tonight, (along with many other people in the audience) was my first return to live theatre since before Christmas, and School of Rock did exactly what a show should do – entertained its audience.