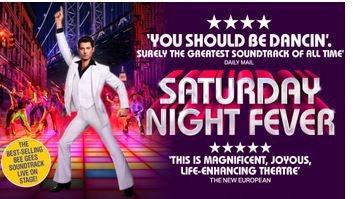 Saturday Night Fever the stage musical is at The Playhouse Theatre Edinburgh this week (Tue 01 to Sat 05 November) and if you remember the film, or even just like the music from the film, then this could be a show for you.

The big problem this show (not matter what production you see) will always have is the lead character of Tony Manero as whoever plays that now iconic role will to many people in the audience always be compared to John Travolta and his performance in the original 1977 film.  In this show, that somewhat poisoned chalice is handed to Jack Wilcox, and to be fair to Jack he does have the professional experience to do this role some justice, but for me something is missing here, and it is something not really definable in words, more in actions.  On stage/on the disco floor, Tony Manero should be where all eyes in the room are focused when he is dancing, everyone else should melt away into the background (except his dance partner), and that was not happening tonight for me.

As a stage musical, this show does what everyone coming to see it will expect it to do, and that is to give them a taste of some of the classic songs from the disco era and of course those wonderful and now iconic Bee Gees songs, and this the show does in abundance. All of the big songs are here including “Stayin’ Alive”, “You Should Be Dancing”, “How Deep Is Your Love” and of course “Night Fever”.  It was also good to hear “Tragedy” (from the Staying Alive film) and “Disco Inferno” by The Trammps.

The music is though oddly where, for me, the problems start with this show as although Saturday Night Fever the stage musical has always been a “juke box” musical, the decision to add three live on stage (well above the main stage actually) Bee Gees “clones” as backing singers to nearly every song was a bit of an odd choice.  Some people in the audience might actually like this new addition to this show, but for me it adds nothing to this production and actually distracts from so much of the show, turning it often into little more than a Bee Gees tribute night out.  This is not the fault of the show’s “Bee Gees”; they all do their job well, this is obviously a production/direction choice.

The problems of this show continue as in its original film form, Saturday Night Fever is much more than just people on the disco dance floor, it has a hard hitting story line set against the many economic issues that America was facing at the time – high petrol prices, rising inflation and unemployment levels being only a few of them.

This film is the story of a whole generation of young men who feel that there is not and never will be any way out of their economic and social traps.  For Tony Manero, Saturday night at the disco is his escape from all of this, the only time he is truly alive, and dancing is the only thing that he has ever been good at in his life.  In this production, we never really get that background information to start with and as we never get to fully understand where Tony Manero comes from, Jack Wilcox has little room to move in his portrayal of the role and with so much of the dramatic story line gone, we only have a one dimensional “disco dancer” for all too much of this show. We do at times though get a glimpse from Jack that his Tony Manero can be unpleasant when he wants to be.

By its very nature, a show like this is going to have people with dance ability over dramatic ability and Rebekah Bryant is a fine dance partner to Tony (Jack) in the role of Stephanie Mangano, but nothing about their on stage chemistry or the dramatic scenes made me believe that meeting each other is THAT big life changing moment for each of them.

There are strands of the original story lines weaving through this production, but interesting as they might be, they are often left going nowhere due to the time limits. Some of these more dramatic story lines are picked up in the second half of this show, and that does save it from just being a collection of songs for the evening that any competent tribute show could have covered