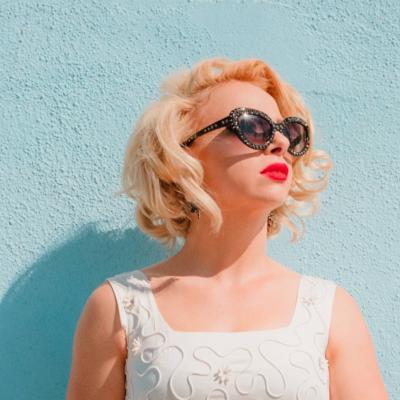 Samantha Fish was at the Queen’s Halls Edinburgh tonight and this re-scheduled show (for obvious reasons) from 2021 and 2022 is one that I had been looking forward to for some time, and as expected Samantha Fish took to the stage full of energy and straight into her music with “Bulletproof”, and neither she nor her music slowed down for a very varied 90 minutes or so set.

This tour was originally planned to promote Samantha Fish’s 2021 studio album “Faster”, so of course some new songs from this one were always going to be on the set list tonight and “Better Be Lonely” and “Twisted Ambition” completed our opening trio of songs.

Samantha Fish seems to be everywhere on line these days as her talents as a songwriter and a guitarist are quite rightly being recognised by many people. It is sometimes a little too easy to forget why this is and the answers are really down to two things – talent and a lot of hard work. For any musician, breaking into the top levels of the music profession as a blues guitarist is always difficult as there is just so much talent out there but, still, despite what anyone might try and tell you, for a woman to break into what is still perceived by too many people as a male dominated genre, doing this is I suspect just that little bit harder. Samantha Fish has simply earned the right to be where she is now, and if this performance this evening is anything to go by, she is certainly going nowhere but upwards.

A lot of people focus (quite rightly) on Samantha Fish and her technical talents as a Blues guitarist, and it is easy to see and hear why – everything is just that sharp, clear and precise, but perhaps more than that with not only feeling but a very individual playing and songwriting style.  Samantha Fish can, if she chooses, play those old Blues standards all night, but instead of just doing this, her own abilities as a songwriter are creating not only “Samantha’s Blues”, but attracting a much needed younger audience to her shows.

Samantha Fish is a bit of a chameleon artist to me, someone who is continually exploring new sounds, new styles and there is always going to be something musically to surprise you. Two of those surprises tonight were cover songs with interesting arrangements. First a very soulful take on the Barbara Lewis classic “Hello Stranger” which for me proved once again just how under-rated her vocals often are as the obvious guitar talents often get noticed first.  Second, and nice to hear Samantha on acoustic guitar for a while, Neil Young’s “Don’t Let It Bring You Down”.

There were of course some Samantha Fish classics and new songs throughout this set (but I am not giving her set list away).  As you would expect, that Blues rhythm underpins much of her songwriting, but it is clear that there is much more to the music of Samantha Fish than just this one musical strand.
On stage with Samantha Fish tonight were her band, Ron Johnson (bass), Sarah Tomek (drums) and Matt Wade (keyboards), who are collectively one very tight musical ensemble that know just when each is needed to best effect to enhance and support each other.

Opening this show for Samantha Fish was British band Willie and The Bandits.  With Willie Edwards leading on guitar and vocals we all got a small taste in the time allowed of just how versatile this band can be with songs like “Still Go Marching In” and “Four Million Days”.

As you would expect for any band supporting Samantha Fish on tour, that ability to play Blues based rock music had to be there, but Willie and The Bandits are a highly versatile band and their ability to switch seamlessly into a “funk groove” was a bit of a surprise for me, and a good one.
Like Samantha Fish, this band work hard and do things the old fashioned way – touring and writing new music, and that much deserved chance to step up to the next level in the music business cannot be far away for them.