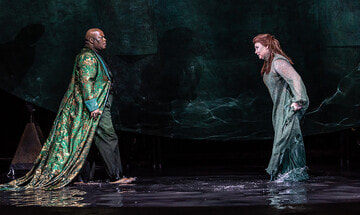 A new production of Dvorak’s Rusalka at The Festival Theatre is one of the main highlights of this years Edinburgh International Festival, and this dark fairy tale’s enduring popularity was obvious from a pretty much full to capacity venue, and appreciative audience applause at the end of this production.

From the moment that the curtain rises it is obvious that this production, featuring one of the 2022 International Festival’s orchestras in residence, the Philharmonia Orchestra conducted by Douglas Boyd, has had a large budget to play with and the set design alone (Tom Piper designer and Malcolm Rippeth lighting designer) is impressive.  This is a large and complex fixed set which gives the impression of very solid mid 19th century industrial iron, steel and copper design, and through an ingenious (and obviously technically demanding to construct) set, the world of water nymph Rusalka is allowed to meet the world of mortals. An interesting use of circus performers on ropes also gives us the illusion that the wood nymphs are moving throughout the air in three dimensional space.

Unfortunately an announcement was made at the beginning of this performance that Natalya Romaniw had to withdraw from the role of Rusalka due to illness and that Elin Pritchard would be perfoming this in her place.  This was on top of the fact that Mark Nathan was also replaced in the role of the hunter Lovec to be replaced by James Geidt. Despite this very last minute change, Elin Pritchard gave an impressive vocal performance as Rusalka and her “Song To The Moon” was worth waiting for.

Rusalka is always a bit of an odd story on many levels for me though and this production is no exception. On the one hand it is a story of a water nymph who sacrifices everything to be mortal and with the human that she has fallen in love with. On the other hand, we have some far deeper questions that are never resolved. In this story only humans have souls, but clearly Rusalka, even as a water nymph, is much more than just that.  When the witch grants Rusalka’s request and makes her human does she by default have a soul, and can the witch bestow a human soul upon someone?

Perhaps Rusalka’s biggest problem as a story is that it only really works well in that twilight fantasy world of water, woods, forest and nature, when Rusalka is with her sister water nymphs and her father the water Goblin, Vodnik (Musa Ngqungwana). The story still holds together when we meet with the witch Ježibaba (Christine Rice) as she is also a conduit between Rusalka’s world of water and the world of mortals.  Here Musa Ngqungwana gives a powerful performance as Vodnik, but it is Christine Rice who gets to command every scene that she is in as the witch Ježibaba, and that was always going to happen as witches, as we all know, steal every scene they are in whether on stage, film, television or just written stories.  We always for some reason remember the witch and I think everyone in the audience tonight will remember this witch.

On land, and in the world of mortals and her Prince, Rusalka is now mute, and despite a very impressive performance at all levels, the role of the Prince really never gives Gerard Schneider much room to expand upon in this story. Once again, the whole of this second act really belongs to Rusalka, but this now is a highly dramatic role as she can no longer speak and we must wordlessly feel her physical pain at walking for the first time, being in a new body, and being lost and perhaps very frightened in this new world of mortals. I never fully got any of this from Rusalka in this performance, and the always difficult to get right dynamic between the Prince and Rusalka was at times missing too.

As I said at the beginning, this set was impressive, and a large circular, drawbridge-like division between water and land with another circular hole in it worked perfectly for some scenes, but depending on your sight lines in the theatre, I could see that it could cause some problems for audiences to get a clear view of some of the unfolding story at both water and earth on stage. This circular hole/portal into Rusalka’s world also seemed at times like a health and safety incident just waiting to happen when it became nothing more than a circular hole in the floor of the ballroom scene.  An opening Act Two set in the kitchens of the Prince’s kitchen complete with deer carcases (presumably not real ones) hanging from ropes and a roasting decapitated deer was for me unpleasant to watch, but more importantly this led to a very clumsy change into the next scene as they had to be removed and dragged or carried off stage.

Rusalka is in the end though a wonderful dark fairy tale with beautiful music, and yes it does have its faults as a story at times, but this production was a bold and innovative take on this story that often breathed new life into it.