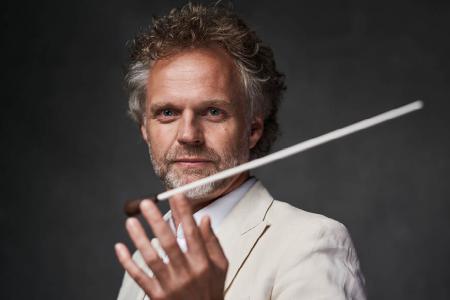 RSNO The Rite Of Spring at The Usher Hall tonight was the opening concert in the new 2022/2023 season and, as you would expect from the title, the work of composer Igor Stravinsky was taking centre stage in this programme.

Stravinsky’s work both opened and closed this evening’s music. First to be performed was “Fireworks”, and as the title suggests this tightly packed and technically challenging short work (4 minutes) is full of the explosive energy of a real fireworks display.

Fireworks was written for the wedding of the daughter of Stravinsky’s tutor and great friend Nikolai Rimsky-Korsakov, and although his friend never lived long enough to see the final score, his daughter and her bridegroom were by all accounts delighted with their “present”. If the story is true, it was upon hearing this work that the impresario Sergei Diaghilev invited Stravinsky to compose works for his ballets, and “Firebird” was soon to follow.

I have to admit that I always find “Fireworks” an odd work as, although I can clearly hear and see those fireworks being brought to life in Stravinsky’s music, I also hear in parts of this music something that at times feels very old and almost mythical, a sort of entrance to a magical world just out of our reach and touch. Sometimes I wonder if Stravinsky was (even if subconsciously) already putting down musical strands and thoughts for what would in a few years be his very divisive work for another Diaghilev Ballet, “The Rite of Spring”.

By any method used to judge music, “The Rite of Spring” is both an incredible work for not only its high level of technical difficulty which demands the most out of any individual or orchestra performing it, but for its astonishing range of emotions and unusual subject matter. Inspired by the idea of old pagan rituals of spring, elders walking ceremonial processional routes and a young woman sacrificing herself to the gods by dancing herself to death, it is perhaps easy to see why this work caused such division when it was first performed in 1913. On the night of this performance the public, critics and fellow musicians were so divided in their opinions, with some calling it a masterpiece and others saying the work bore no resemblance to what they called music. The divisions were so contrasting that a riot broke out in the theatre.

Thankfully, with the passage of time, this work has become widely accepted for the masterpiece of composition that it has always been and this closing performance saw conductor Thomas Søndergård bring out from the RSNO every subtlety that this work offers as he took us all, with Stravinsky’s music, into a world of pagan ritual, wonder and at times disturbing danger. It is sometimes though still difficult to imagine how in the few short years from “Firebird” (1909) to “Rite of Spring” (1913) Stravinsky had evolved in so many ways as a composer.

That element of a riot taking place was also a connection between this work and the short new work that immediately preceded it, “The Riot Act” by David Fennessy.  Originally this work was planned (but delayed for obvious reasons) to be performed in 2019 and mark the centenary of a very dark moment in the relationship between those in power and the working classes – “The Battle of George Square” in Glasgow.

This major stand-off between authority and protesters was an event that I was taught nothing about at school and when I found many years later archive images of tanks on the streets of Glasgow on this day, I knew I had to find out more about this.

The Battle of George Square took place on Friday 31 January 1919, 82 days after the end of the First World War. It is hard to imagine this event now, and tens of thousands of strikers, protesters, police and military all packed into a very small area of Glasgow and the incendiary atmosphere that day as “The Riot Act” was read out aloud in public.  Somehow though in this short 6 minute work David Fennessy captures a little of what that day might have sounded like, and you can almost imagine yourself being there amidst the shouting, beating of improvised drums, whistles, and mounted police. This was in many ways the sounds of warfare brought to Glasgow streets and this work is important in reminding us all that if we do not sometimes fight for them, our perceived freedom of speech and freedom as individuals can all too easily be eroded and taken away by those in authority.  This work also proves that in the hands of the right composer a powerful story can be told in a short period of performance time.

Completing this evening’s programme and closing the first half performance was Violin Concerto Op15 by Benjamin Britten. Renowned for its technical difficulty by both orchestras and soloists, this work was brought to life by Thomas Søndergård /RSNO and Stefan Jackiw on violin. It is easy to understand why Stefan at still only 37 years old is regarded to be one of America’s foremost violinists and his ability to not only deal with the technical demands of this work, but to enter into that special place that is needed to interpret and share that experience with an audience was obvious.