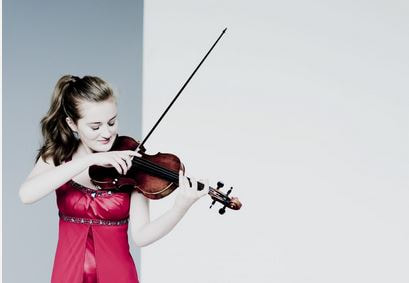 RSNO Symphonie Fantastique at The Usher Hall Edinburgh featuring Noa Wildschut performing Mendelssohn’s  Violin Concerto was a change to the planned programme of “Nicola Benedetti plays Simpson”. Unfortunately, due to an injury, Nicola Benedetti was not able to perform with the RSNO as planned.

As always for me, attending any RSNO performance is a learning curve as I always find out more about music I know and so often find wonderful new music for the first time. This evening’s full programme (below) was no exception to my musical journey of exploration with RSNO.

The first performance featured music from French composer Augusta Mary Anne Holmès (1847 -1903) and La nuit et l’amour, Interlude from Ludus Pro Patria. First performed in 1888, Ludus pro patria (Patriotic Games) takes its inspiration from a painting of the same name by French artist Pierre Puvis de Chavannes, and in her music themes of war and romance interweave to tell a story of conflicting passions. This wonderful 6 minute interlude, La nuit et l’amour says everything both in its title and in Holmes’ music.

Listening to this music, even for the first time, it is hard to believe now the outright prejudice and many closed doors that female composers faced from the rigidly male dominated music world of their times. Like many women, Holmes was often forced to write under a male pseudonym simply to even get her works published. Many important music competitions and prizes specifically excluded women from entering them. Thankfully for us tonight, Holmes was never defeated by the rules of society of her day and her legacy of wonderful music is still with us and still being performed today.

Few things seem to inspire composers more than love – love found, love lost, love unrequited…the thematic variants on the subject seem to be endless, and our musical love theme this evening continues with BERLIOZ Symphonie fantastique (first performed in 1830) and with it his almost psychedelic story, told in music, of a gifted artist with perhaps an all too lively imagination who has let a hopeless and unrequited love drive him to the depths of despair. To add to his woes, the artist has also poisoned himself with opium and we get to enter into the now very strange world of his thoughts and dreams, thoughts that take him over five movements from almost pastoral beauty and calmness to his troubled final ending. The fourth movement, with its inspired use of four percussionists to beat the sounds of drums leading him to the gallows, is a fine example of telling a story through music at its best.

Berlioz was inspired in part to write Symphonie fantastique following his own all consuming and self-delusional idolisation of actress Harriet Smithson.  All of his unrequited love was obviously channelled into his music and this story. There was a bittersweet ending for Berlioz here as his music did get him the woman of his dreams in the end; the two did marry, but eventually separated after years of arguments and unhappiness. Sometimes the old warning of “Be careful what you wish for” is a true one.

In between our two stories of love, Noa Wildschut and her performance of MENDELSSOHN Violin Concerto in E Minor. Like many musicians of her talent level, music has been a large part of Noa’s life since early childhood, and now, still only 20 years old, she is already with her obvious talents making her mark on the classical music world.

Originally first performed in 1845, this is Mendelssohn’s last concerto (he died in 1847), and although this is a brilliant work that was both bold and innovative for its times, the composer it seems struggled at times with his own belief that it was going to be good enough.  Self-doubt seems to all too often be a part of the psychological make-up of a genius.

Although this change will have disappointed Nicola’s many followers, Noa Wildschut I am sure has gained many new fans of her music with her performance tonight.

Bringing all three works into life and colour this evening was the RSNO and the obvious passion for the music of Conductor Fabien Gabel.