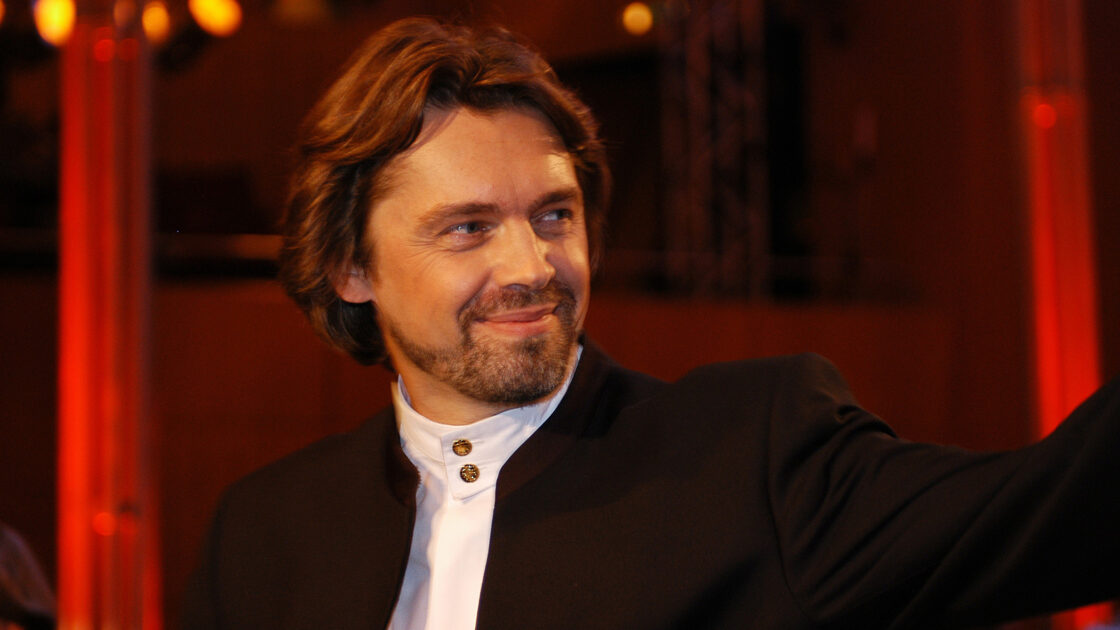 Boreyko Photo by Christoph Raèttger.
RSNO performed their “Shostakovich Spectacular” at the Usher Hall Edinburgh tonight which comprised of the three works below

Due to unforeseen circumstances, conductor James Conlon has had to withdraw from this week’s concerts in Perth, Edinburgh and Glasgow to be replaced at very short notice by Andrey Boreyko, Music and Artistic Director of Warsaw Philharmonic Orchestra and Naples Philharmonic.  It came as some surprise, we were told, to the RSNO that a conductor with the reputation and concert appearance schedule of Andrey Boreyko was available to step in to this concert programme at such short notice, but there is a reason, and a noble one. To show his support for the people of Ukraine, Andrey Boreyko has cancelled all of his Russian engagements.  It was therefore only correct that our concert opened with music to the patriotic hymn, “Prayer For The Ukraine”.

I have to admit when writing this review that Dmitri Dmitriyevich Shostakovich  (1906 – 1975) is a composer who has interested me for many years as I always see him as one of the major musical bridges between all the classic musical traditions of the 19th century and before, to what not only classical music but so many other areas of music evolved into in the 20th century. For me, Shostakovich and his music are some of the major musical foundation stones of so much of what we now take for granted in music as he was never afraid to challenge the way that he would construct his work and often give us new sounds to listen to.  Shostakovich is also an interesting man and his relationship with the Soviet Era state of the 20th century, and in particular Joseph Stalin, was always a a bit of a balancing act which at times saw him and his work in favour, at other times he was most certainly out of favour and his own life in real danger as his work was banned and he was also removed from his teaching positions.

The opening work in this programme, Suite from Lady Macbeth of Mtsensk, Shostakovich, taken from his 1932 opera is not only a work of incredible imagination, colour and emotion, but it is also the opera which Stalin took a very clear dislike to resulting in it being banned, so this of course led to, amongst other things, very negative press coverage for the opera.

A highlight of this evening for many people, including myself, was the at times enthusiastic performance of Piano Concerto No2 by Simon Trpceski, and the audience loved it, resulting in some of us wondering if Trpceski was ever going to be allowed to leave the stage.  All of this was of course deserved appreciation as this is such work of contrasts.  The second movement is simply beautiful to listen to, but as a whole it is also a fine example of Shostakovich showing us that he could compose just as easily in styles and structures both old/traditional and new/innovative. To do a piano concerto like this justice, you need someone playing it who obviously loves every note, every phrase of the music and Simon Trpceski brought all of these qualities to the stage with him for this performance.

The final work of this evening is important for many reasons. Shostakovich wrote his Fifth Symphony literally in terror for his life and gave it the title ‘A Soviet artist’s response to justified criticism’ and you can feel in parts that some of the emotions that he must have been feeling at this time, and moments of his terror are still there for us to listen to through his music.

For me, Shostakovich is always a composer, and a man, almost split in two halves and they always seem to be fighting for control of the other. I always through his music imagine looking up at the sky and watching two different moments unfold. Sometimes we have the beauty of a bright new day just starting to shine through the clouds above, and at other times the equal beauty and power of dark storm clouds approaching.  There is always though love and hope in the music of Dmitri Dmitriyevich Shostakovich and you know that if you wait long enough the storm clouds will always give way to the new light, the new sky of a calmer day.  In this evening’s performance, RSNO captured all of this in his music for me.