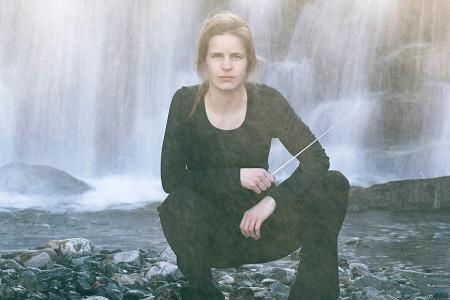 RSNO Sibelius Five at the Usher Hall Edinburgh tonight continues a long association that the orchestra has had with the works of Finnish composer Jean Sibelius (1865-1957). This performance carries on the lasting influence of Sir Alexander Gibson, the orchestra’s longest serving musical director/principal conductor (1959 – 1984) who was also awarded Finland’s Sibelius Medal.

I have to admit (like many other people perhaps) that although the work of Jean Sibelius is known to me, it has perhaps been a little overshadowed by classical European and Russian composers, but tonight is correcting that error a little and making me understand a little more just why this composer is so important to so many people. There is something very different about the music of Sibelius, and although European and Russian classical influences and traditions are obviously there, what has emerged often is music with a different sound, and a unique identity connecting it to Finland.  All of this is more remarkable when you consider that between 1809 and 1917 Finland was an autonomous part of the Russian Empire.

The opening work of this evening, THEA MUSGRAVE Song of the Enchanter has obvious connections with Sibelius as it is a short work of 6 minutes commissioned in 1990 by the Helsinki Philharmonic Orchestra to honour the 125th anniversary of Jean Sibelius’ birth. In this work we step into the worlds of Finnish mythology and the Kalevala epic and the hero-God Väinämäinen. Drawing inspiration from the work of Sibelius himself, Thea Musgrave skilfully interweaves tales of magic and mythology to create a mini-epic of wonderful sounds that evoke nature, myth, magic and the music of Sibelius in a short but wonderful moment in time. There is of course that very local connection here too with Edinburgh born Scottish-American composer Thea Musgrave, and a musical circle is made almost complete.

The inspiration of the natural world around us is everywhere in the music of tonight’s performance programme and Czech composer Antonin Dvorak takes his initial inspiration of the sounds, beauty and sheer power of Niagara Falls for his Cello Concerto in B Minor with internationally renowned Swedish cellist Torleif Thedéen taking the spotlight as soloist. In the right hands (as here) the cello is an all too often overlooked solo instrument as it is capable of an enormous range of tonal power and beauty. The sheer power and breath-taking beauty of nature at her most powerful are all captured in this work by Antonin Dvorak.

It is of course, SIBELIUS SYMPHONY No5 in E flat Major that takes the centre stage of this evening’s programme. For this work, the Finnish government commissioned the composer to write the symphony in honour of his 50th birthday (8 December 1915), which had also been declared a national holiday. As you would expect for such a personal work, there is much of Sibelius himself in this work and again nature was his inspiration for the “swan theme” of the most famous part of this work in the third movement. This, however, is no casual mimicking of nature but using sound to almost recreate the very movement of swans travelling across the sky, or in this case the Usher Hall stage.

So much has been written over the years about the music of Sibelius, and this work in particular. Musicologists have commented and debated on its structures for over 100 years, and there is nothing more on this subject that this review can add to what has already been written here.  To be honest, in the end none of this scholarly examination of symphony No 5 really matters as the technicalities of the music are not what has made this work so loved by so many people worldwide. What has done this is the obvious genius of Sibelius in somehow capturing in music a little of the endless wonder of the natural world around him and creating an emotional response in so many people when they hear this wonderful music played.  Tonight the RSNO obviously captured some of that elusive wonder and mystery too in their performance of this work.

Conducting all of our works this evening was Norwegian Tabita Berglund, who is swiftly establishing her own identity and obvious talents in Europe as one of the most exciting young conductors of today.