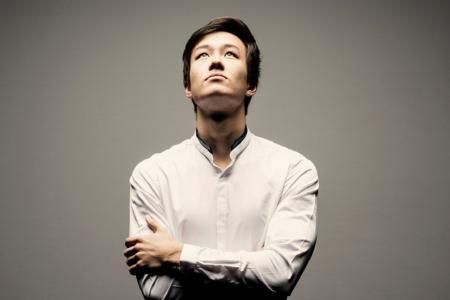 RSNO Gershwin & Rachmaninov at The Usher Hall Edinburgh tonight was a celebration of work by arguably three of the most important musical figures of the first half of the 20th century – Maurice Ravel (1875-1937), George Gershwin (1898-1937)  and Sergei Rachmaninov (1873-1943). Not only did these three composers often bring new and innovatively bold ideas to their music and helped to define the musical landscape of those early decades, but their work, their musical genius, was often to help shape and define music for the rest of the 20th century and in one way or another they are still reaching out to us in the third decade of the 21st century.

The first half of this evening’s performance gave us works by Ravel and Gershwin and it is appropriate that both composers be highlighted together as, in real life, both were great admirers of each other’s work and Gershwin famously asked Ravel (more than once) if he would consider being his tutor. Ravel, of course, realised that Gershwin was such a distinctively brilliant talent that he needed no help from him at all.  Music was not the only binding chain between both men though. Just as Gershwin was to so often capture the very essence of jazz bars and dancing in his music, Ravel also had a great attachment to folk dances and waltzes and his “Valses nobles et sentimentales” opened tonight’s programme.

Originally this work was written for piano (and first published in 1911), and comprised of 8 short valses (waltzes) and was inspired by Ravel’s interest in and admiration for Viennese Waltz and also of composer Schubert who was also a lover of waltzes.  With this evening’s performance we have not the piano version, but the fully orchestrated work of 1912, and to be able to not only do the very difficult task of taking a solo piano piece and arranging it for full orchestration, but doing it so brilliantly over 15 minutes of time is a lasting tribute to Ravel’s musical genius.

The next work in this evening’s programme, GERSHWIN Concerto in F from 1925 is quite rightly considered by many people to be one of the great musical works of the 20th century and follows on from Gershwin’s famous “Rhapsody In Blue” from the year earlier.

I have to admit that George Gershwin is one of my musical “heroes” as not only did he create with his fusion of jazz and classical music genres a sound that was unique, but somehow also captured the very spirit of America of the times. Here in his music you can so often feel that beating rhythm of not only the jazz era, but somehow also the very energy of the people and also that great energy that was building so much of what was to define, perhaps forever, the great cities of America.  This work, which was commissioned by the director of the New York Symphony Orchestra, Walter Damroscha (after being in the audience when “Rhapsody in Blue” was performed) does everything (and more) that the concept of bringing a full sized orchestra and a piano performance together whilst blending jazz and classical music into one form outlined. For this performance, pianist Louis Schwizgebel brings his obvious love and impressive technical skills to not only interpret this music, but to bring it to life and take us all back in time to those nostalgic days of smoky jazz bars with piano and trumpet music floating through the air, and maybe for just a little moment, maybe even the whole 31 minutes of this performance, Louis Schwizgebel took some of us back in time to the 1920s too.

It is perhaps true to say that no one really defined this period in American music like George Gershwin, and his influence in not only creating a very American sound, but helping to make it accepted and respected as a true cultural art form cannot be under-estimated. Like me, many will of course know many of those wonderful songs that George Gershwin wrote with his brother Ira Gershwin adding his equally wonderful lyrics too. So many amazing songs that are now  irremovable pages from “The Great American Songbook”.

For some reason, when I think of George Gershwin, I always think of the last music he wrote before his all too early death from a brain tumour at only 38 years old, “Love is Here to Stay”. Like many other people I wonder if his brother Ira was writing some of his words to his brother when he wrote the lyrics for this song.

The final work of this evening RACHMANINOV Symphony No3 was worth the wait as this one often gets overlooked in favour of his 2nd symphony. At the time of its creation Rachmaninov had taken the opportunity to leave the troubles of his homeland behind and take up the offer to tour Scandinavia, and despite all the wonderful life and colours and energy of this work there are still hints of the darker emotions of the composer’s self-imposed exile to be heard here. This is not only a longing for a lost home, lost friends and family, but also a realisation that the Russia he knew was now gone forever.

For me, the music of Rachmaninov is always interesting because I was hearing it long before anyone tried to define it by calling it classical music and still today I think of his work as simply just wonderful music that really has no classification to it.  How many of us out there know Rachmaninov's music from his Piano Concerto No.2  from the films “Brief Encounter” (1945) and “The Seven Year Itch” (1955)?

Conducting all three works this evening, and bringing his own highly respected interpretive and expressive talents to the stage, John Wilson.