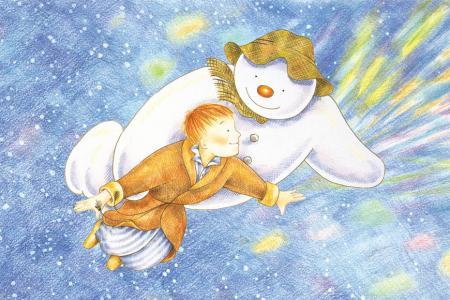 RSNO Christmas Concert featuring “The Snowman” at the Usher Hall Edinburgh this afternoon has become as much a part of the festive season as the Christmas Carols and festive themes music of this very special concert, and as usual it was a relaxed event for the whole family.

The Christmas concerts are always an opportunity to catch the RSNO relaxing a little bit more than usual and just having obvious fun with the music of the season. Neil Ferris, conductor, resplendent in a red jacket that matched the seating of the Usher Hall (intentionally or not) was obviously enjoying the moment here.

Centre stage of this performance was of course a screening of “The Snowman” accompanied with the RSNO performing the music and Aled Jones reading the story. Those of us who are old enough will of course remember that it was Aled Jones who had the 1985 chart singles hit with “Walking In The Air” from this film. It is, however, sometimes forgotten that it was Peter Auty who sang this song in the 1982 animated film of the 1978 Raymond Brigg’s Book. “Walking In The Air” has of course been recorded over the years by many other artists, but this song and “The Snowman” obviously still hold a special place in Aled Jones’ heart and a few of his memories of his schooldays at the time of recording his version of this song were shared with the audience this afternoon to the amusement of many in the audience (particularly the children).

This Christmas concert is always a little bit of a sugar-coated fantasy view of the festive season and Christmas, but there is nothing wrong with that, and perhaps the most important thing it does is introduce young children to that wonder of coming into a concert hall and watching and listening to a full orchestra like the RSNO perform music.  Anything that breaks down the barriers to experiencing and enjoying music of all genres always gets my vote, and hopefully many of the children in the audience this afternoon will go on throughout their lives to explore the endless wonder of music that is out there  and letting the RSNO and other orchestras be their introduction and guide to some of it.