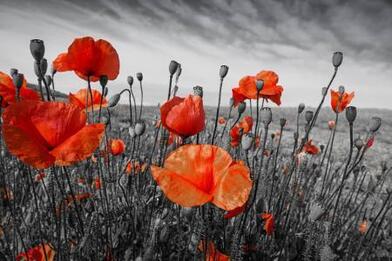 RSNO Britten’s War Requiem at the Usher Hall Edinburgh was appropriately being performed on Armistice Day, but this work is no celebration of war, but as the composer himself stated “My subject is War, and the pity of War”.  There is though always a tension to this work as Benjamin Britten’s own firmly held pacifist beliefs seem to be in conflict with his own realisation that sometimes, in the face of great evil (Nazi Germany/WW2) beliefs and principals can be tested to their stretching point (and beyond).

Since its first performance in the new Coventry Cathedral in 1962, Britten’s War Requiem has quite rightly been regarded by many people as a 20th century masterpiece, and part of the enduring status of this work is in its broad construction of taking diverse musical structures and wrapping around them the sounds of a Latin Mass and the words of War Poet Wilfred Owen. This “war requiem” is a glorious collection of many different strands that are somehow woven together into a coherent work of wonder which you can come back to time and time again and always find something new in. At times it is also like someone taking pieces from totally unconnected jigsaw puzzles and somehow not only making them fit together seamlessly but also making a new picture out of them all. War Requiem is a work that can be viewed by many people, each perhaps seeing a slightly different view and interpretation of it.

Despite all this complexity, this work is at its heart essentially very simple too with the requiem itself requiring only three singers. It is the musical and literal thoughts and strands that layer in between the trio of singers, chorus, youth chorus and orchestra that give this work both its wonder and power.

War Requiem is a large production, and tonight the whole of the large performance area of the Usher Hall was taken up with the orchestra and the chorus. The youth chorus were outside the main hall performing and their voices added a very surreal element to this performance, almost as it you were hearing these voices from somewhere just outside of your normal perception.

In a large scale event like this one, every member of the orchestra and chorus has their part to play. Sometimes that is fleeting, at other times they are more central to the story and sometimes you get this strange feeling that “War Requiem” is almost alive, and at times at war with itself, or at best trying somehow to resolve the never ending debates over war and peace. Is peace itself always possible to maintain if all other options to preserve what you hold dear have been exhausted? In this work, Britten gives no answers to these big questions as there are no definitive answers. What he does, however, is present us with the ultimate futility of war as a means to an end.

This was simply a classic work brought to life by the RSNO with a classic performance. Also included in bringing Britten’s War Requiem to life were: