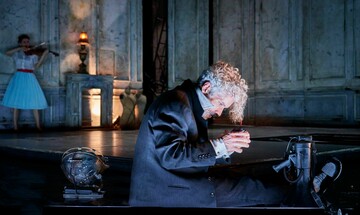 Room at The King’s Theatre sees the return to the Edinburgh International Festival of Swiss performance artist James Thierrée and his physical performance theatre company. This show is my first encounter with his work, but even the quickest of internet searches will tell you that James Thierrée is a performance legend, born into a circus family, with the spotlight and stage encoded into his DNA.

It is almost impossible to define Room in a review as it is very much an immersive production with James Thierrée drawing his audience into his own very special physical space that lies somewhere between absurdity and that space in dreams where everything is familiar but for some reason is not where it should be in both time and space.

This is one show that I have to admit I am at the moment still processing and completely divided about. Have I just sat and watched a comedy and stage genius at work, or given up nearly two hours of my life to someone else’s fantasy world that I will never be able to get back? I honestly do not know.
The things that I do know about Room though are that this show may give an impression of improvised anarchy, but in reality nothing could be further from the truth. This performance, every person in it, every use of props, every gesture, every movement no matter how small is timed to the second in an almost endless series of visual, and sometimes audio, snippets that again look random, again look disconnected, but often seem to be resolved as the show goes on.

There is much to like about this show, so much of the comedy is very much from the silent film days and often James Thierrée is a Chaplinesque figure conducting himself and everyone in this world that he has so painstakingly created on-stage.

What is Room? That question echoes throughout this performance, and even Room does not know as its visual space and identity are constantly changing, trying to somehow find the perfect space that its creator, James Thierrée, is perfectly happy with.

So much of this performance is in impeccable timing by everyone on stage and often the humour is silent, but the laughter from the audience is not. Room is obviously touching somewhere very deep in many of the audience members of this show and I am asking myself as I write this review, why am I not laughing with them much of the time. Perhaps it is because for some reason I have never fully entered into the world of “Room”, maybe I had the little yellow key to the door that in the end was the wrong one.

I can see the sheer creativity and the enormous amount of work involved in creating Room. I can see that James Thierrée is a very unique and creative individual, but for some reason I ended up looking at this Room from the outside and not from the inside.  Maybe I just need to see this show again and process more clearly some of the vast amount of visual and audio information that is in this performance in almost overwhelming levels.